Pyramids of Giza on Horseback with Kids 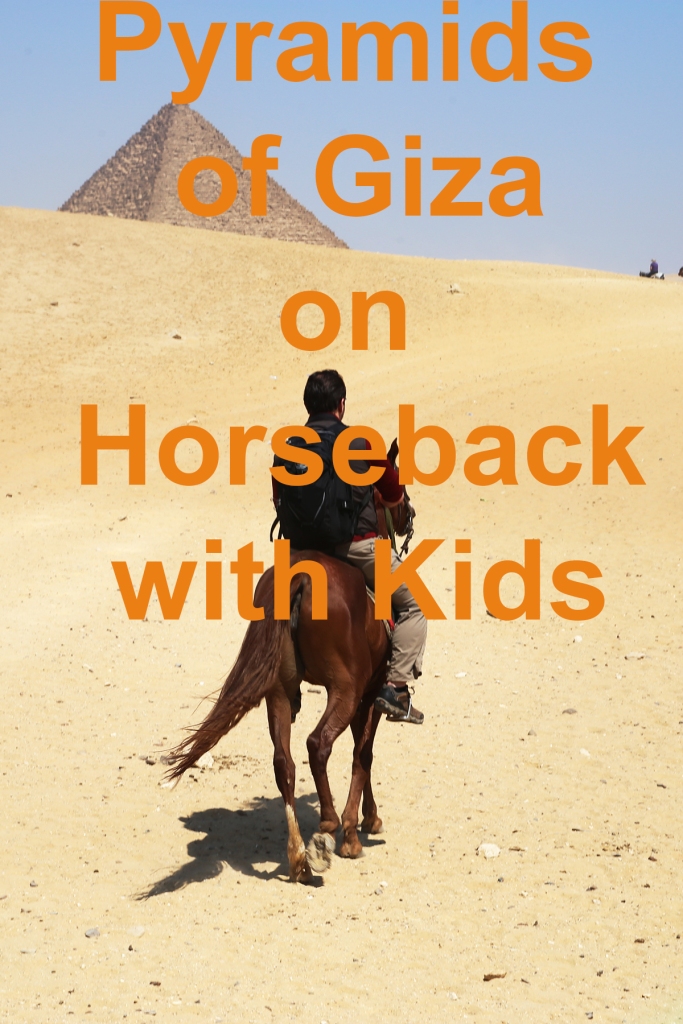 Just five days into our life in Cairo and we made it to the Pyramids of Giza. This all came about rather suddenly, but was great fun. I have a friend living here in Cairo who is from my own small hometown and was in the same grade as my brother. She’s been here a while and so is in the know about everything. We wanted to get together as she’s actually moving next week (!) and so she invited us to join her and her fiancee on a horseback ride around the pyramids. It was easy peasy for us as she arranged everything.

We started off the morning at 8 am with the driver she arranged picking us up at our apartment. He’s known her forever and knew exactly which stables to go to-which meant no trying to take us to his “brother’s cousin’s uncle’s place” that of course is always “way better” than wherever you wanted to go. DD spent the whole ride exclaiming about the pyramids and being on the lookout for the first glimpse of them. She also kept asking when she’d see the Nile. We really talked up some of the sites prior to our move here, so she has been keen to see them. I’m pretty sure she expected to go to the pyramids on Day 1, but hopefully Day 5 was good enough!

One thing about white taxis here is that seatbelts aren’t really a given or even that common. The front seats did today, but not the back seats. So DS rode strapped to my chest and DD just sat next to me. You just kinda hope there isn’t an accident. I gather most Ubers have seatbelts and we’ll have a car soon enough and will have the carseats in there. I have a blowup booster seat for DD for us to use when riding in someone else’s car.  The nice thing about going today is that Friday morning prayers means very light traffic. So far I’ve only ridden on the roads during Eid and Friday prayers—so I’m not sure where all the traffic is everyone talks about!

We arrived at the stables and hung out in a nice shady area waiting for Kareem the owner to arrive. It was paved with awnings, padded benches and tables. Our driver went to get tea and Turkish coffee for those who wanted it from a nearby stand and the kids had a snack and watched camels, horses, ATVs, and Tuk tuks pass by. Yes, Cairo has tuk tuks! I gather they are as obnoxious here as they are in India!  Big plus for the stables was the presence of a bathroom. 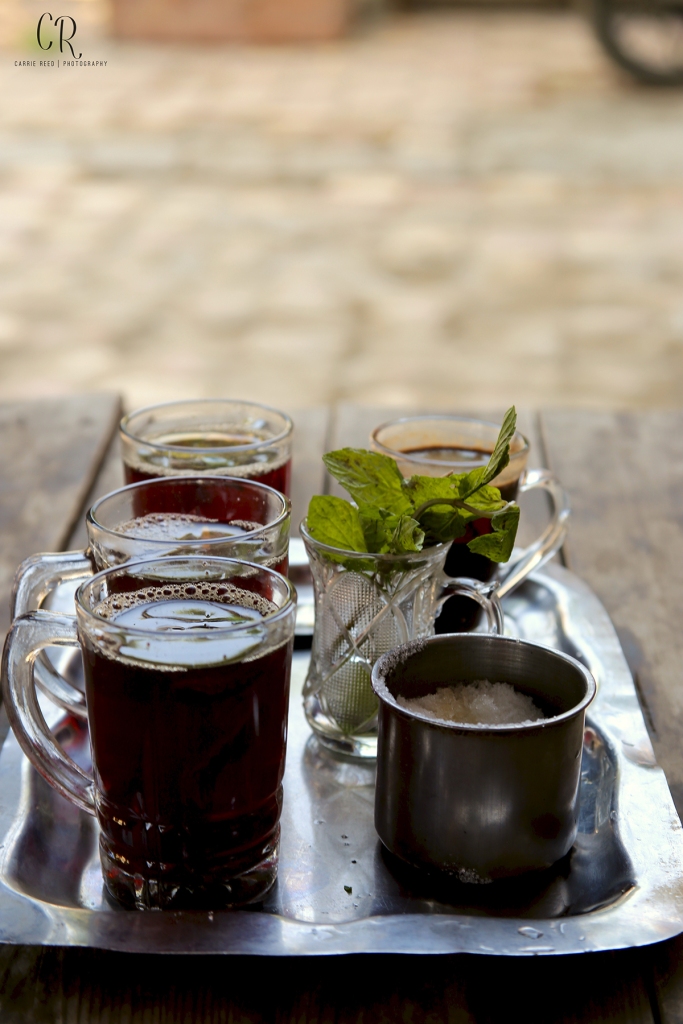 Soon enough we mounted up on the horses—DD riding in front of DH and DS strapped onto my chest with the baby carrier. Our two friends were on horses as well and then the owner rode with us. He has known my friend for a long time as well. I guess often you’d have a stableboy with you—both to act as a guide (as in finding the right path, not giving factual information on the sites) and to hold the horses if you want to get off and explore by foot or go inside.

Riding was not as hot as I had feared. There was a good breeze and we were dressed appropriately—adventure pants, breathable shirts, hats that covered us well (except for DH). Definitely suggest a sun hat! And of course, sun block. It was hottest when we stopped and I’m sure would have been hot walking around. We chose to stay on horseback the whole time and will explore by foot another time.

The ride was not hard and for my friend’s fiance, it was his first time on a horse. They have a range of horses with different abilities. His was definitely a calm, steady follow the pack horse. My friend’s horse was spirited and liked to run, but she is an experienced horsewoman. Mine was stubborn and DH’s was very slow and steady. The guide helped us along.

Kid Ages–Any and all! Ours were 17 months and 4 years. The younger rode strapped to my chest. You definitely need younger kids strapped to you as you’ll need to hold onto the horse’s reins as well. They don’t provide helmets, so you don’t want them to fall. The 4 year old rode in front of her daddy. She complained of some discomfort as they were both trying to fit on one saddle. Older kids can have their own horse once they are stable enough not to fall off.

Farouk Breesh Stables—Phone: 01223535115.  If you put FB Stables, Giza into google maps, it will show up. It’s down at the end of row of horse stables.  It is relatively well known.  We paid LE 150 an hour a horse, which is about $8.25/hour. I don’t know if we got the “special friend rate” or if that is what everyone pays. We rode for 1.5 hours, but obviously it would take longer if you got off to walk around. There are great views from the roof, so ask someone to show you up the stairs to the top floor!

Our driver, Samy—Phone: 01228444524   He works during the week, but is free on Fridays and sometimes other times and is worth a call. He speaks good English. His car is one of the white taxis, so don’t expect seatbelts or AC.  He knows where the stables are and will wait for you there during your ride.  Uber will also get you there.

Bathrooms—there is a bathroom at the FB Stables, immediately to the left as you walk into the stables. Not fancy, but the toilet was clean and in one piece. There was a sink, but bring your own TP and soap or hand sanitizer.

Food and Water—we packed snacks and water in our backpack, which DH wore while he rode. We had two regular bottles and then brought 2 frozen bottles, which thawed quickly over our ride and provided lovely cold water during the 2nd half and afterwards. Near FB Stables is a little food stand where we got tea and Turkish coffee. Our driver also had bought some Egyptian snacks there, which I tried and were yummy. They sold water also. The Stables had a great sitting area, so plan on eating there before or after—they are quite fine with you hanging out in their shade.

Security—Upon entering the Pyramid Complex, we went through security. It was pretty simple and we stayed on horseback. For me, this involved the police officer asking me if I had any guns, bombs, or knives on me and I said no. DH’s backpack was searched for those three things. I don’t know if the main entrance (we went through the horse one) has more searching or not. So leave weapons at home, but otherwise you’ll be good!

Clothing—I highly suggest lightweight, breathable pants, a lightweight top (kids and I had short sleeves, but I might try for lightweight long sleeves next time for sun protection), and a big rimmed hat. It can get a bit breezy riding, so a hat that stays on easily is best. DS’ tied under his chin which helped. DD’s kept blowing off. My ball cap stayed on, but didn’t protect my neck.  Wear closed toed shoes and use sunblock! We brought it in our bag and reapplied halfway through. 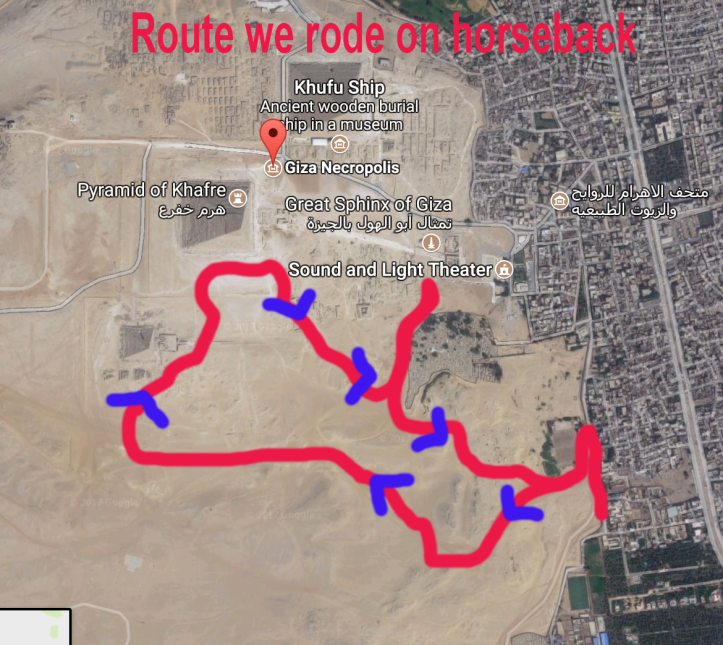