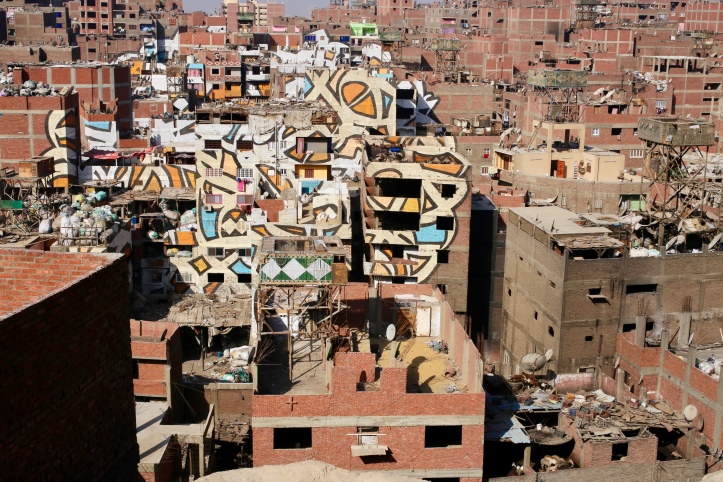 Garbage City doesn’t sound like an appealing tourist destination. And it’s true that it can range from smelly to truly odiferous. It’s crowded, has narrow winding streets and would be easy to get lost in. Officially known as Manshiyat Nasser or Moqattam (due to its location at the base of the Moqattam Hills), Garbage City is home to the Zabbaleen or informal garbage collectors.

The Zabbaleen are almost entirely Coptic Christians who, upon arriving in Cairo from Upper Egypt, needed to find work. They found a niche in garbage collecting and, according to our tour guide, for 70 years did a great job with this. Residents around Cairo paid the Zabbaleen to collect all their garbage directly from their houses. Using donkey carts or pick up trucks, they’d haul the garbage back to their home where they’d sort out recyclables to sell and then pile up the rest of the garbage. Men typically collect the garbage and women and children sort it. Almost 85-90% of the garbage is recycled. Our guide said Cairo used to be fairly clean with little garbage lying around.

But then in 2003 the government decided it wanted official garbage collection and contracted the job out to a company. The company set up communal garbage bins throughout the city, but expected residents to bring their garbage to the bins. Garbage collection fees were automatically added to electrical bills. Two problems arose. One, people simply weren’t taking the extra step of hauling garbage from their apartment or house to the bins (which might not be nearby) and the company didn’t do a good job regularly collecting and emptying the bins.

The Zabbaleen continued to work, but many people could not afford to pay for both the contracted garbage company (automatically billed) AND pay the Zabbaleen. So they just throw the garbage on the ground. The Zabbaleen now mostly sort garbage as they find it and pull out recyclables unless paid by a family to pick up all the garbage. Our guide’s opinion is that the city would be much cleaner if the government hadn’t messed with a system, however informal, that was working. Now the Zabbaleen handle about 40% of the city’s garbage. 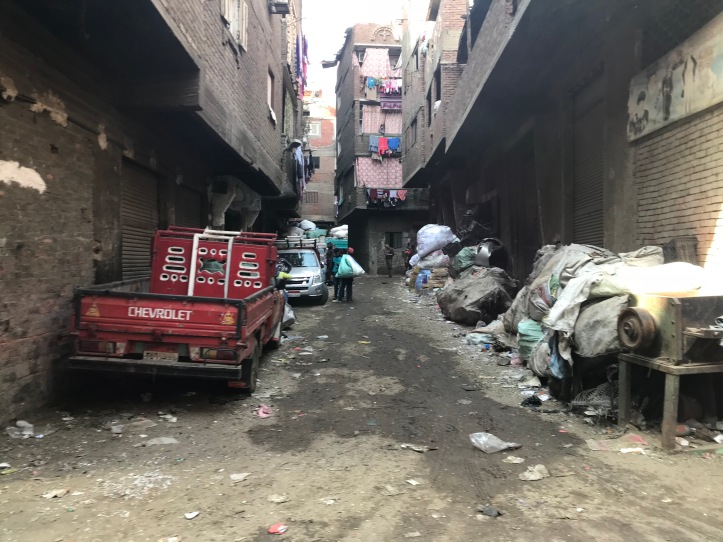 Many animals live in Manshiyat Nasser. Goats, sheep, and occasionally pigs live on rooftops as green space is lacking. There used to be 350,000 pigs in the area who ate the organic matter off the garbage and then were sold as meat to hotels and restaurants who catered to non-Muslims. But the threat of swine flu caused the government to kill most of the pigs, though you still see a few.

Within Garbage City, an organization called the Association for the Protection of the Environment (or A.P.E.) operates. It helps provide skills to the local women where they turn trash they find into sellable items. They have two small stores where they sell jewelry, recycled paper products, and cloth items of all types. They also help create and teach environmentally sound waste management systems. You can visit their center, which is a bit of an oasis in the middle of the chaos, see the women working and buy some products. Visit http://www.ape.org.eg/index.html for more information.

Within Garbage City, you should also visit the Cave Church, which will be the topic of another post.

PS: Sorry for the blurry photos, but we were in a moving van.

It’s best to visit with a tour guide and driver who knows where they’re going. The roads are very narrow with no real signs. Walk Like an Egyptian does periodic tours here, which is who I used.

Visit in the cold months to cut down on the smell.

A.P.E. has bathrooms, as does the Cave Church.

You can walk, though many tours are by car and stop at the Cave Church and A.P.E. If you want to walk, be sure to arrange that ahead of time.