Guide to the Memphis, Egypt Open Air Museum with Kids

4000 years before Cairo, Memphis bustled with palaces, temples, tombs, and embalming houses as the first capital of Egypt. A major religious center and center for the cult of the creator god Ptah was founded by king Menes during the 1st Dynasty at the beginning of the 3rd millennium B.C. Originally called Ineb-hedj and then Men-nefer, Memphis continued to be a major religious site even after the capital moved to Thebes and then to Tanis.

Today, almost all of Memphis lies in ruins beneath the modern village and farmland of Mit Rahina. However, there is ongoing archaeological digging and a well-done Open Air Museum that provides a taste of the relics found so far. The highlights are the massive Ramses II statue and the alabaster sphinx of Amenophis II. 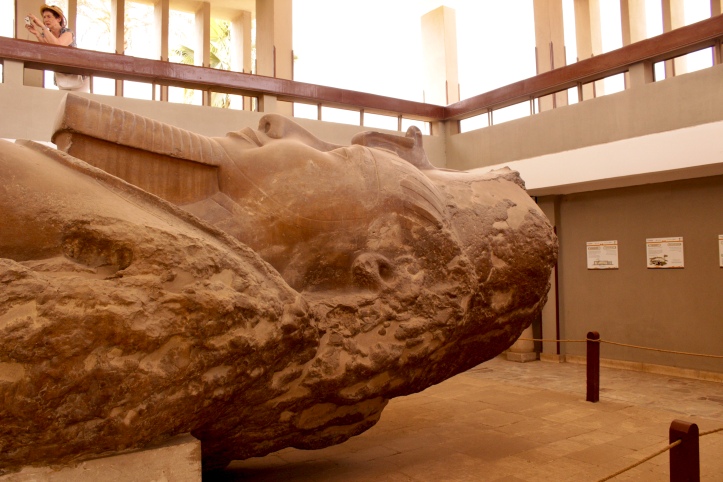 Memphis lies south of Giza across the Nile from Maadi. It is near Saqqara and Dahshur and easily combined with trips to those sites or with horseback riding at Abu Sir. The museum only takes about 45 minutes to view but is well-organized and of historical importance. Eventually (Inshallah!) the walking circuit will open, allowing visitors access to the archaeological sites. For now though, despite the large signage saying otherwise, they are not open to the public.

First stop at the museum is the building housing the massive statue of Ramses II. A Genoese traveler found it in 1820 face down and partially buried in a swampy area. Missing its legs, it lies face up in the building and visitors can circle the colossus pharaoh from the ground level or up above on a viewing balcony. My 5 year old loved finding the cartouches on his body, pointing out the hieroglyphics, and looking at his double crown of Upper and Lower Egypt.

Outside our kids enjoyed the space to stretch their legs, especially as we had made a wrong turn on the way to Memphis and it took 30 minutes to get turned back around, making a 45 minute drive into 1 hr 15 mins. U-Turns are not easy to do here in Cairo and once you’re on a major road, it can be awhile before you can exit and get turned around. 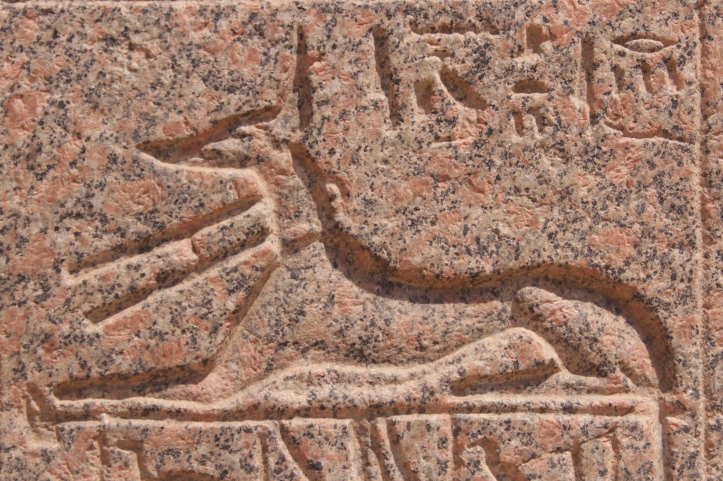 The Sphinx was very impressive, an 80 ton alabaster statue of Amenophis II discovered in 1912. We also saw many statues of Ramses II, who along with being one of the greatest and most famous pharaohs, also loved making statues of himself! The greatest example being perhaps at Abu Simbel. 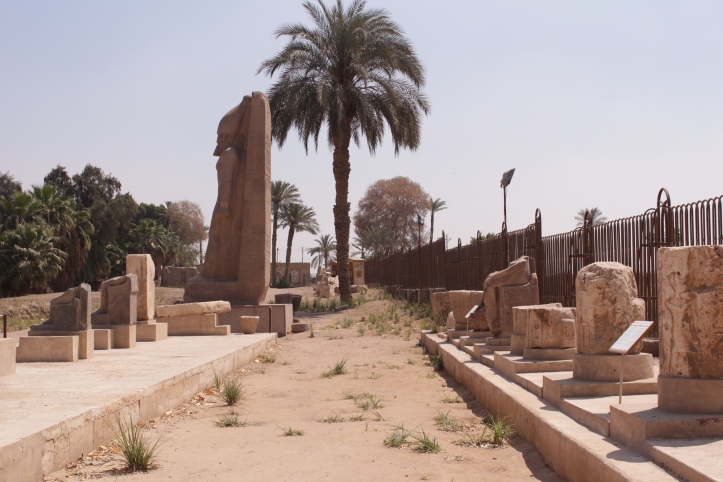 Location? Memphis, near Saqqara Pyramids. Search for “Ramses II Statue” on googlemaps to find it. https://goo.gl/maps/eygUcAGic182. About 45 min from Maadi.

Cost? 60Le for foreign adults; get 50% off with diplomatic ID. Kids free

Toilets? Yes, clean with tp and soap. Have coins for attendant

Food/Drinks Allowed? Sold?  Drinks sold outside. We brought in water and snacks for the kids without a problem in my bag.

Stroller Friendly? Yes. The grounds are dirt but pretty smooth. The building holding the massive Ramesses II statue has a ramp. Upstairs to the viewing balcony is the only non accessible place. Also a very easy spot for toddlers to run around. It’s not massive nor crowded and my 2 year old had no problem exploring it. Just be careful near the Sphinx as there is a drop.

Notes: It only takes about 45 min to go through the open air museum, so it’s best to combine the outing with Saqqara, Dahshur or horseback riding at Abu Sir. Plenty of space for kids to run around, a few benches under trees and very well-done signs in English and Arabic explaining the artifacts and site. Visit http://memphisegypt.org/ ahead of time to read about the excavation project, the history of Memphis, and to download brochures and information.  Unfortunately, at this time (April 2018) the walking circuit has not opened yet but if it ever does, it should be excellent.