Want to see rhinos? Then Ngorongoro Crater, Tanzania gives you a decent shot at it. It’s still not guaranteed, and it is likely to be from quite a distance, but you still have a chance of checking them off your To See list.

From UNESCO’s World Heritage List page on the Conservation Area:

The Ngorongoro Conservation Area (809,440 ha) spans vast expanses of highland plains, savanna, savanna woodlands and forests, from the plains of the Serengeti National Park in the north-west, to the eastern arm of the Great Rift Valley. The area was established in 1959 as a multiple land use area, with wildlife coexisting with semi-nomadic Maasai pastoralists practising traditional livestock grazing. It includes the spectacular Ngorongoro Crater, the world’s largest caldera, and Olduvai Gorge, a 14km long deep ravine. The property has global importance for biodiversity conservation in view of the presence of globally threatened species such as the black Rhino, the density of wildlife inhabiting the Ngorongoro Crater and surrounding areas throughout the year, and the annual migration of wildebeest, zebra, Thompson’s and Grant’s gazelles and other ungulates into the northern plains.

The area has been subject to extensive archaeological research for over 80 years and has yielded a long sequence of evidence of human evolution and human-environment dynamics, collectively extending over a span of almost four million years to the early modern era. This evidence includes fossilized footprints at Laetoli, associated with the development of human bipedalism, a sequence of diverse, evolving hominin species within Olduvai gorge, which range from Australopiths such as Zinjanthropus boisei to the Homo lineage that includes Homo habilis, Homo erectus and Homo sapiens; an early form of Homo sapiens at Lake Ndutu; and, in the Ngorongoro crater, remains that document the development of stone technology and the transition to the use of iron. The overall landscape of the area is seen to have the potential to reveal much more evidence concerning the rise of anatomically modern humans, modern behavior and human ecology.

We visited the Ngorongoro Crater from Gibb’s Farm. It takes 30 minutes to go from the farm to the main gate for the Conservation Area. There you stop, fill out paperwork (or your guide does), use the bathroom, and get ready for a horrendously bumpy, dusty, and agonizing drive to the crater rim. That takes about an hour. You stop again at the rim for bathrooms and tickets and a nice view if the fog allows.

Then it’s a very steep, bumpy drive down to the base. Don’t worry, it’s a one-way road! (and the road headed up is sooooo much better!) The 14 mile wide crater was a bit underwhelming for us. Lots of zebra, wildebeest, gazelle, buffalo and other similar creatures. No giraffes and while the UNESCO site says it has the highest density of lions in the world (62 lions in 2001), we only saw 7 and 4 of those were at a distance.

At one point we came across a congress of jeeps (our name for a group of jeeps all pushing and jockeying for best animal viewing position) and discovered a lioness with her freshly killed zebra. We didn’t see the take down, but it had just happened. She was breathing heavily and very annoyed that jeeps were surrounding her. She had the misfortune of killing the zebra right on the road, so it was a bit hard to avoid her or her kill. I felt a bit bad for her, as all she probably wanted to do was catch her breath and have lunch. DS2 had no idea what we were looking at as his window didn’t look out at her and DD5 was very matter-of-fact about it and didn’t seem bothered by seeing a dead zebra. But just as a warning if you have sensitive kids–you do sometimes see freshly killed animals up close and some people see the take down.

We got to see a lot of hippo and had the closest view of a jackal of our trip. We also saw hyena, warthogs, and elephants. The elephants were at the end of our time while exiting through a forested area. It included some baby elephants who were adorable. 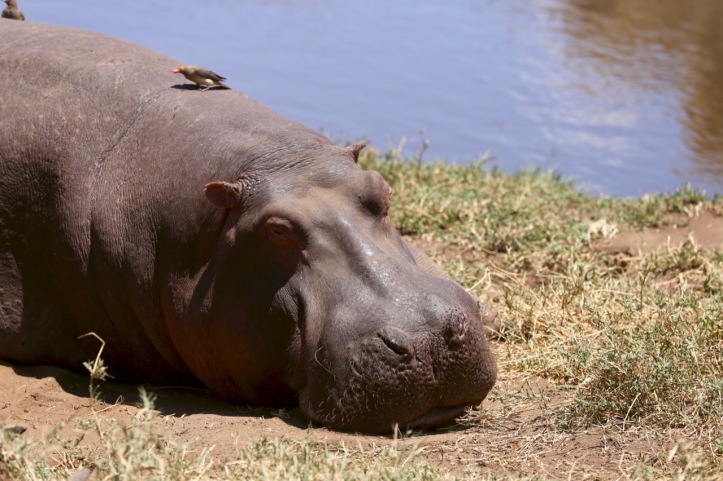 Our main goal for the crater was to see a rhino. Our guide said there are 20 black rhinos in the crater, but they are very hard to find. They graze with other animals and blend in with herds of wildebeest, buffalo or zebra from a distance. They also will lie down and look like rocks.

We spent a lot of time peering through binoculars at things in the distance before realizing they were rocks or wildebeest or a shadow. But eventually our guide spotted a rhino waaaaaaaaaaay out along the line where grass met dirt near some zebra. Eventually each adult was able to spot it. But not DD5. So we tried to get to a better angle.

It really looked like one of the roads went past where the rhino was and we even saw a cluster of jeeps. So we headed off. Problem was, the roads did major circles along the perimeter of the crater with not many cut throughs. It took a long time to circle around to where we thought the rhino was.

Eventually we got to where we thought we needed to be only to realize the cluster of jeeps was for the dead zebra and lion we’d seen earlier and that looking through binoculars at a distance point had compressed things and the road was no where close to the rhino. We drove around a while and realized we couldn’t get closer and couldn’t see it at all.

At this point we headed off to lunch at the picnic spot. Though picnic was a misnomer because everyone pretty much ate in their jeeps. There were no picnic tables and there were birds everywhere trying to steal lunches. So we ate in the car with boxes on our laps. But there were bathrooms and a pretty view of a hippo pool. 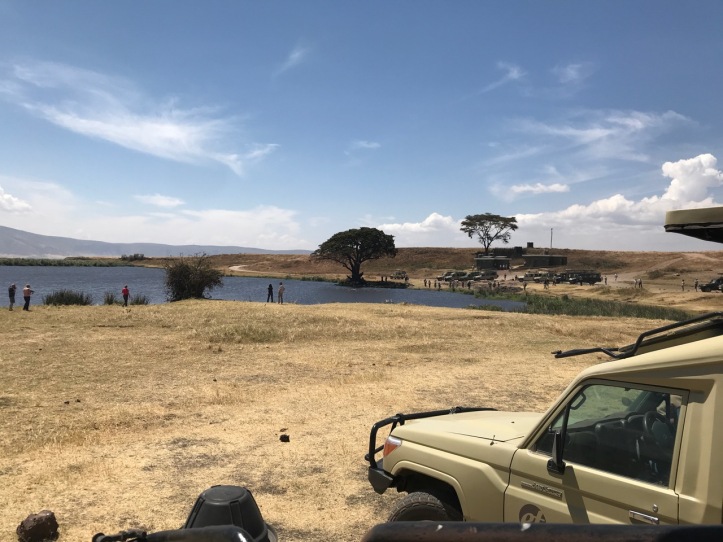 After lunch we decided to go back to the original rhino spotting to see if we could find him again. We went up on a hill with a great view and eventually found it again. Now the challenge was getting DD5 to see it.

Getting a 5 year old to find a teeny tiny rhino through binoculars is impossible. We tried lining them up, but then we’d have to adjust to her eyesight. Finally I thought of using R’s camera with its 400mm zoom to find the rhino and then let DD look through the viewfinder. It worked! She was thrilled!!

Overview of all posts: