A Family Trip to Saqqara and Dahshur Pyramids

Over a year ago the kids and I took a trip to Saqqara, Dahshur, and Giza pyramids with visiting family. (Read about that here) DH has gone with other guests. But we hadn’t done a family trip yet and with a new round of visitors, we decided it was time. Our original plan was the pyramid complex at Giza but last minute we realized it was a site for a 5K, 10K and marathon that day! No Thank You!

So instead we hired a van and went down to Saqqara and Dahshur. It was cold and windy and even rained the second half of our outing! Not typical Cairo weather. But I managed to check off two things I hadn’t done yet–going inside the Red Pyramid and seeing the Imhotep Museum–so I was pleased.

We started at Dahshur. Chronologically, it comes after Saqqara, but we chose to do it first as it is a more finite space and you could spend ages at Saqqara and we didn’t want to run out of time.

At Dahshur we started at the Red Pyramid. This and the Bent Pyramid were built by Snofru, founder of the 4th Dynasty (starts 2561 BC).  The Red Pyramid is the 2nd largest pyramid in Egypt and is called such because of the reddish limestone used. It is 220m wide and 105m tall. All 8 of us (including DD5 and DS3) climbed the steps up to the entrance on the outside. Kids elected to stay on the outside, so DH stayed with them as he’d been inside before. 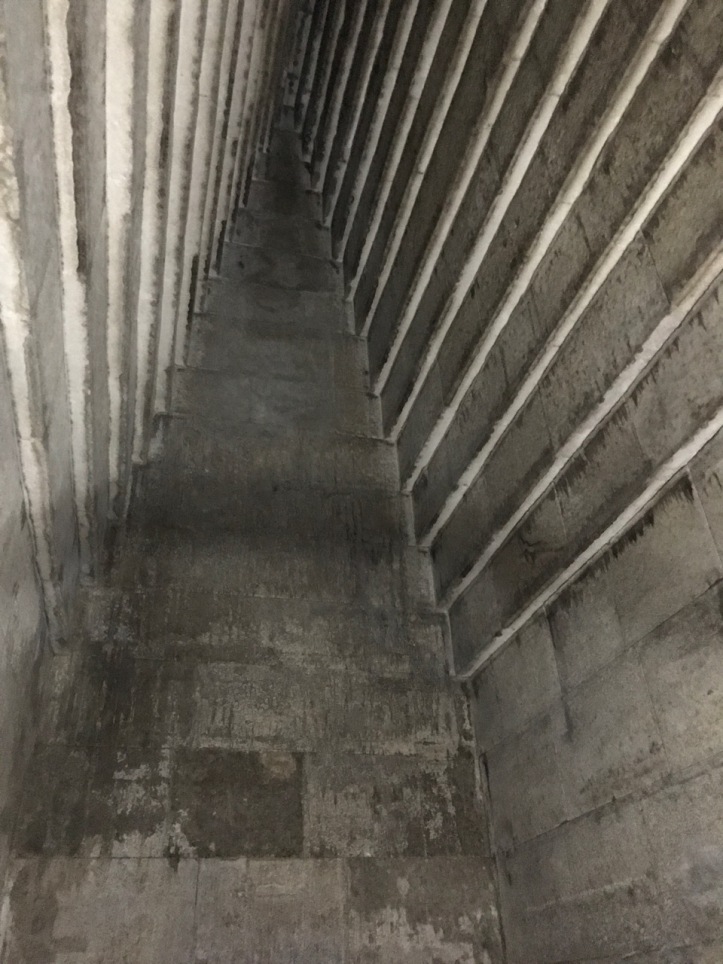 Our 4 guests and I climbed inside! It is not for the claustrophobic or those with bad knees or back that is for sure! The ramp down has wood nailed on it to form low steps, but the ceiling is so low you have to bend half way over and do a crouching climb down. Once inside there are 3 chambers with high corbeled ceilings. The chambers were not as big as I expected, but it was still cool to be inside. These chambers are empty and have no paintings on the walls.

Next up was the older Bent Pyramid. The famous Bent Pyramid was the first attempt to build a true pyramid without the steps. Unfortunately, mathematical calculations were incorrect and halfway up they realized that the pyramid would be too tall before the sides met and it could collapse. They adjusted the angle of construction, giving it a bent appearance. 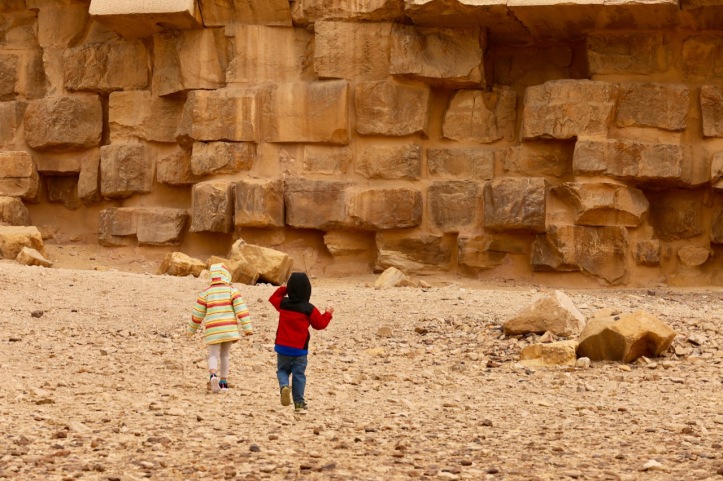 It was sooooo windy! Luckily one side of the pyramid was wind free and there was a structure we could climb up (wooden stairs) to a platform for a view of the Red Pyramid. We walked the entire perimeter of the pyramid. Kids got tired halfway around and got shoulder rides. Lucky kids! 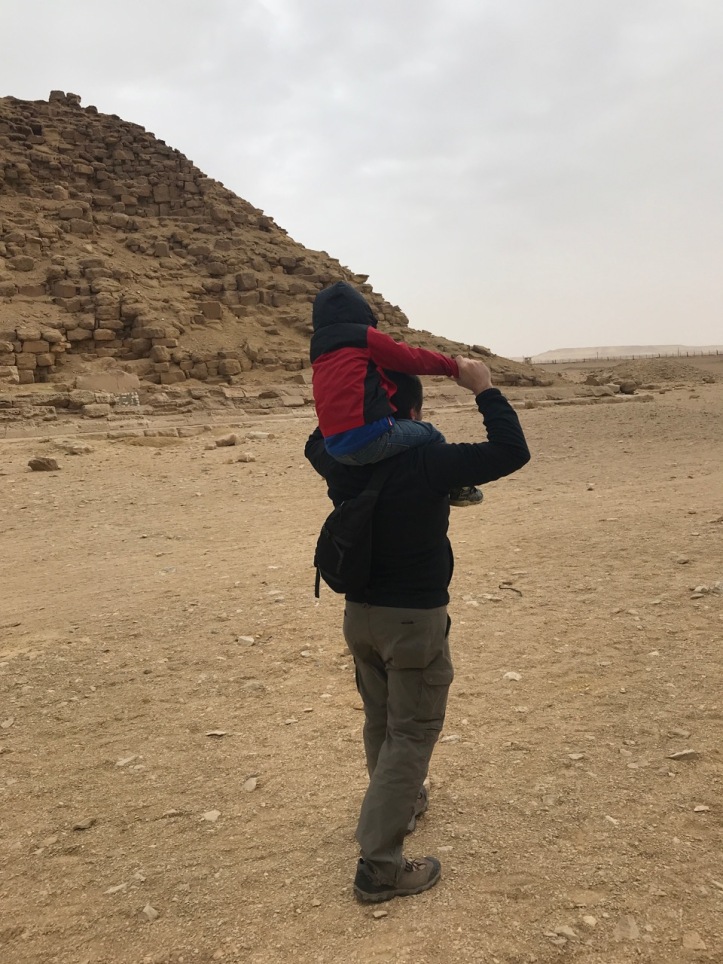 At Saqqara we started at the Imhotep Museum. Imhotep was the architect for the step pyramid at Saqqara. The Museum is well done with good signs in English, Arabic, and French. It has 6 halls with artifacts from the Saqqara complex, art, architectural elements, and personal effects from French Egyptologist Jean-Phillippe Lauer who was instrumental in work at Saqqara. It is definitely worth a stop and provides good information about the site.

Next we drove up to the parking lot near the Step Pyramid. This is Djoser’s pyramid and the most famous part of the Saqqara site. Imhotep designed it initially as a large mastaba over a deep burial shaft which connected to a series of chambers for the king’s burial chamber, King’s apartment, chambers for  his sons and consorts, chambers for funerary equipment, etc. Later the mastaba was enlarged to add additional steps to make a celestial staircase. 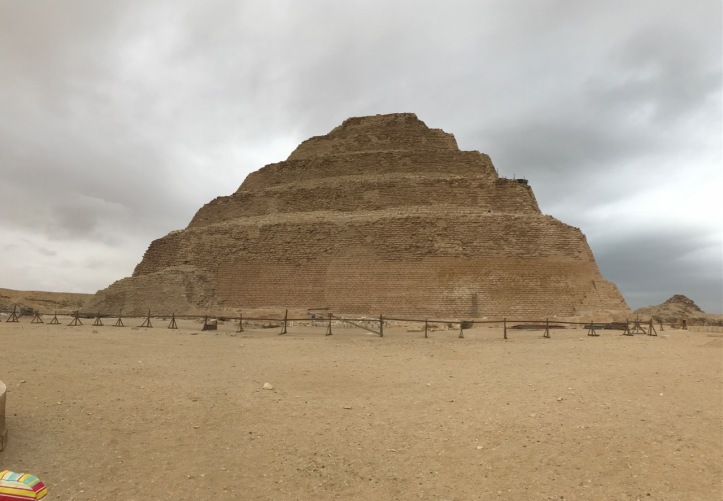 We attempted to go into the Pyramid of Unas, which I had visited last time, but it was closed. This was unfortunate as it is a kid friendly pyramid! By this time the wind had picked up and the kids were cold and tired and we all decided we’d seen enough. But there is plenty more to do at Saqqara! 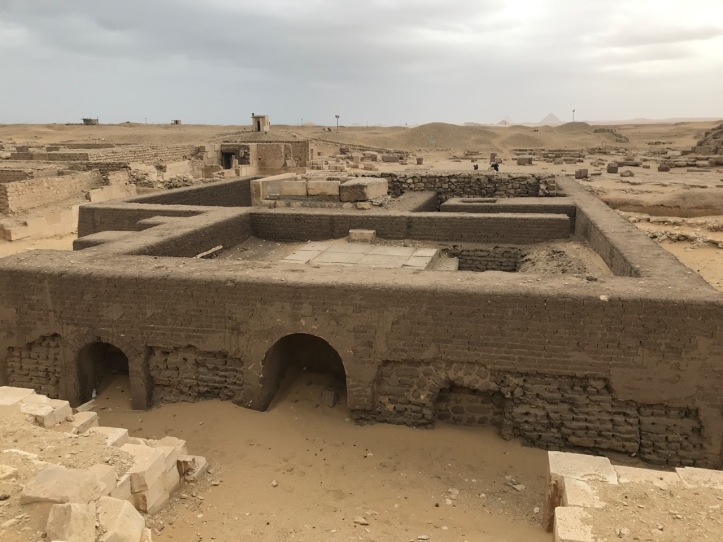 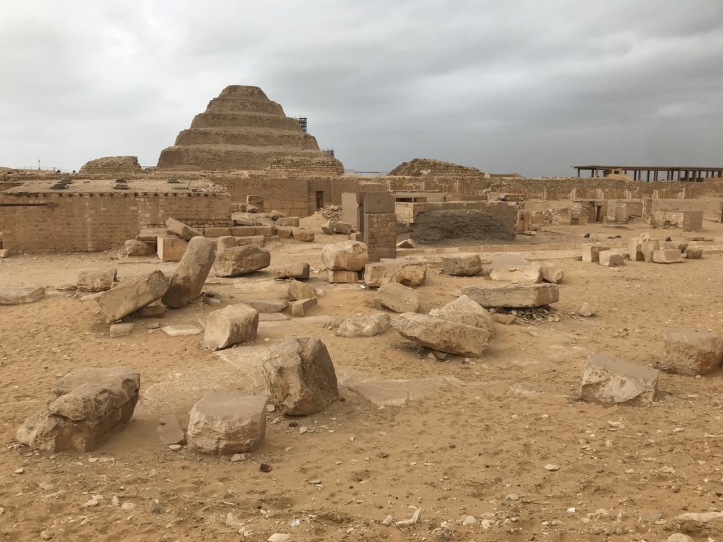 Getting There: Both Saqqara and Dahshur have parking lots and are easy to self drive to. Dahshur’s parking lots are very near both pyramids, so if you have someone not mobile they can see the pyramids without much walking.

Strollers: Nope! Dahshur is all sand and rocks. Saqqara is as well, though the Imhotep Museum is stroller friendly. My kids enjoy the spaces to run around and climb a bit.

Food and Drink: First time we went to Dahshur there was a drink vendor near the bathrooms. This time there was not. Saqqara has a slightly better chance of finding one. But assume you need to bring all your own water and snacks. We’ve always packed lunch to eat in the car or parking lot, but I’ve heard there are little cafes you could stop at as well. There are also spots to buy water on the road to the pyramids.

Bathrooms: Dahshur has bathrooms next to the Red Pyramid parking lot. It is a small concrete building set down some stairs. There is a spray painted WC on the wall, but the building doesn’t really stand out. Saqqara has bathrooms at the Imhotep Museum. There may be others, but we didn’t see them (nor did we explore the whole complex). Be prepared to tip the attendant (2le when we went). They normally have TP, but I always bring my own in case.

Guides: Any tour company can arrange a trip to the pyramids. Be very clear about what you want to see. I use Mostafa Fawzy and he arranges a car or van, guide, and driver, and is reasonably priced. Contact him via phone call or Whatsapp (preferred) at +20 111 733 3477 or email at

Costs: As of 2/15/19, Dahshur was 60le. This included viewing the Bent and Red Pyramid and entering the Red Pyramid. Car was an additional 10le. Saqqara was 150le for entry, which included the ground level stuff (seeing Step Pyramid and wandering grounds) plus the Imhotep Museum. All the inside things (tombs, Serapeum, etc) were additional costs ranging from 60le to 150le. Purchase tickets at entrance. We simply did the entry ticket, but I plan to go back and do all the others on a nicer day. Kids under 6 are free and over 6 are discounted.

Photography: Outside photos are allowed at all sites. No photos inside the Imhotep Museum or other tombs/pyramids without a photography ticket (300le!). However, at the Red Pyramid, they checked for tickets if you had a regular camera but did not care if you brought in your cell phone.