Ankara Castle and the Museum of Anatolian Civilization with Kids

Yesterday we did our first family sightseeing adventure in Ankara! We headed off in a taxi to Ankara Castle (sometimes called the Citadel) to climb ruins. I’d read in reviews that people didn’t recommend kids going because of the lack of safety features, but given our past trips I figured we’d be fine–and we were! Sure, you have to pay attention to your kids. And if they are the type to yank away from you and run, maybe not your best bet. But otherwise, it was great. And easy!

*Construction date is unknown, though most likely postdates the destruction of Ankara by the Persians in 622. It might have been built by the Hittites.

*The Romans, Byzantines, Seljuq Turks, Crusaders and Ottoman Empire all used the castle

*There are inner and outer castle walls. There are many homes within the walls that are still occupied today

After getting dropped off by the taxi at the outer castle gate (see picture above), we walked through the arch and uphill along a pretty cobblestone street past shops. One nice thing about Turkey is things open up earlier than in Cairo! We arrived at 10 and many shops were open (not all, but enough!). We weren’t quite sure how to get to the castle and made a few wrong turns (no signs), but after standing still at one point, looking at the castle walls but having no idea how to get there, a young man pointed us in the right way. I guess they figured a foreigner standing around looking clueless meant we needed to get to the castle!

(If you are going there yourself, walk up the hill from the entrance until you hit the T intersection. Then turn left and follow the road through an arch and around a curve. Then take the steps on the right up, up, up until you hit the castle ruins.) 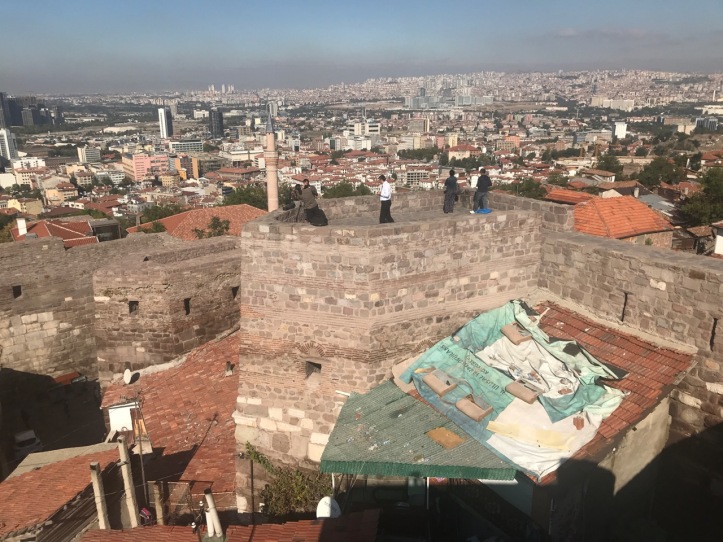 We climbed up the steps to the castle walls. Not a lot remains, but the views were great. Definitely go early in the morning. There weren’t a ton of people there, but there were some and numbers were increasing as we left. It opens at 9 am each day. DH and I each took charge of a kid and informed them they absolutely had to hold a hand while we were on the walls. They were awesome listeners and did just as we asked and we felt fine safety wise. Certain parts had small walls so they could see the view without falling. And the lower levels had more barriers. Steps are steep though and uneven. 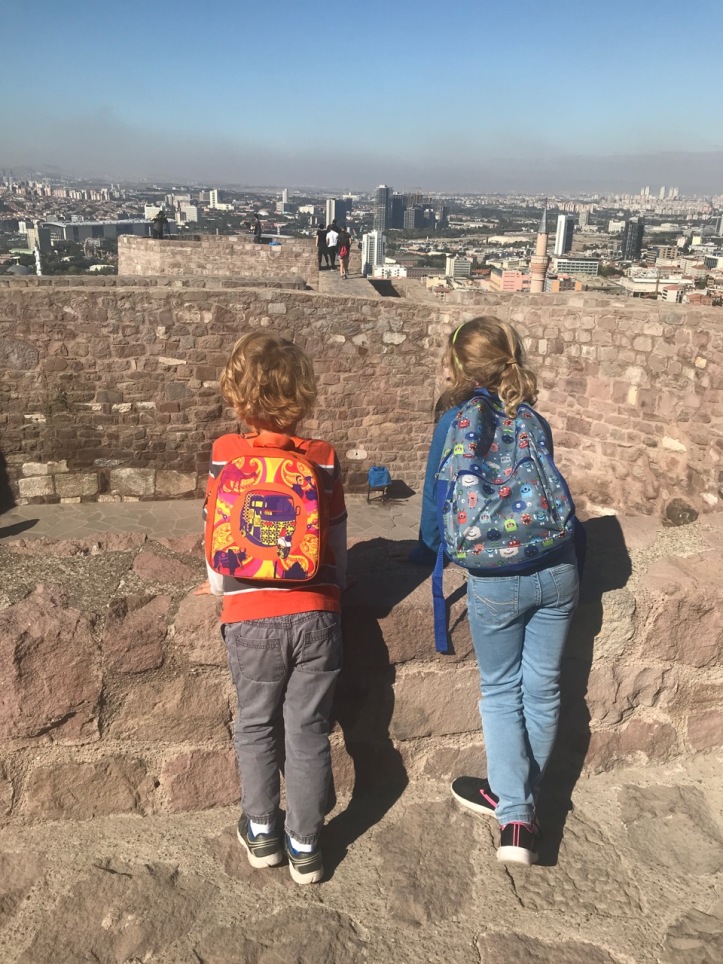 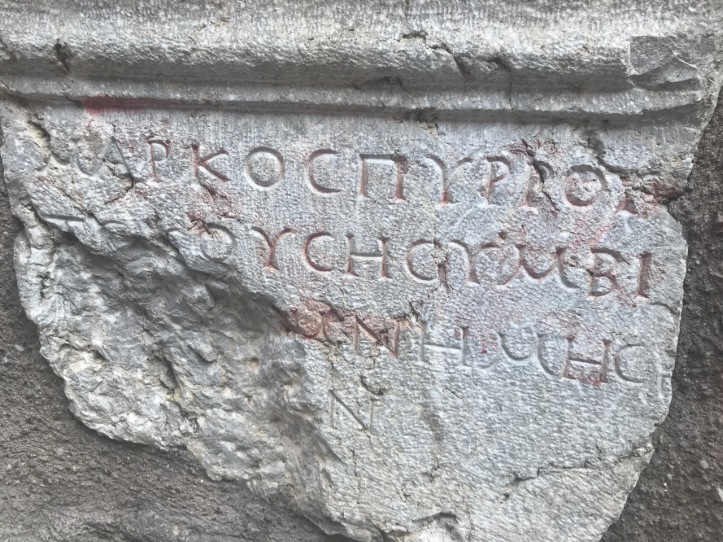 We also enjoyed listening to some musicians play in the castle. DD particularly liked the music and insisted we stay and listen to it longer. (Listen here at my FB page)

We wandered the streets some more and walked uphill to another portion of a castle we saw, but it is unfortunately closed to visitors. Headed back down and enjoyed a snack we brought at the fountain. It has very pleasant benches around it and we liked watching the square and the people as we ate. 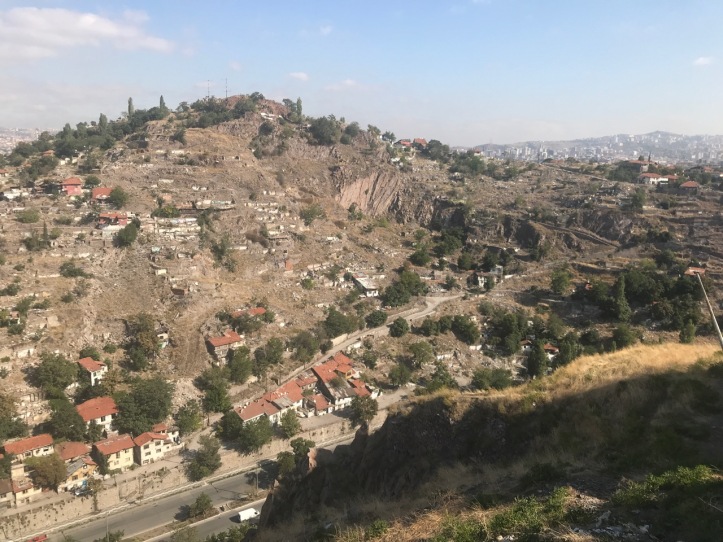 From the castle area, it was an easy downhill walk (only about 5 mins) to the Museum of Anatolian Civilization. Very easy to do both of them together. I was impressed with how organized it was and that everything was in Turkish and English. The kids enjoyed a lot of the artifacts, though they move at a much faster pace than we would normally do at a museum! It is not huge, just one floor, and you move in a large square chronologically from Paleolithic to classical era. The outside garden space was very nice as well. There were two cafes, but we didn’t eat there. 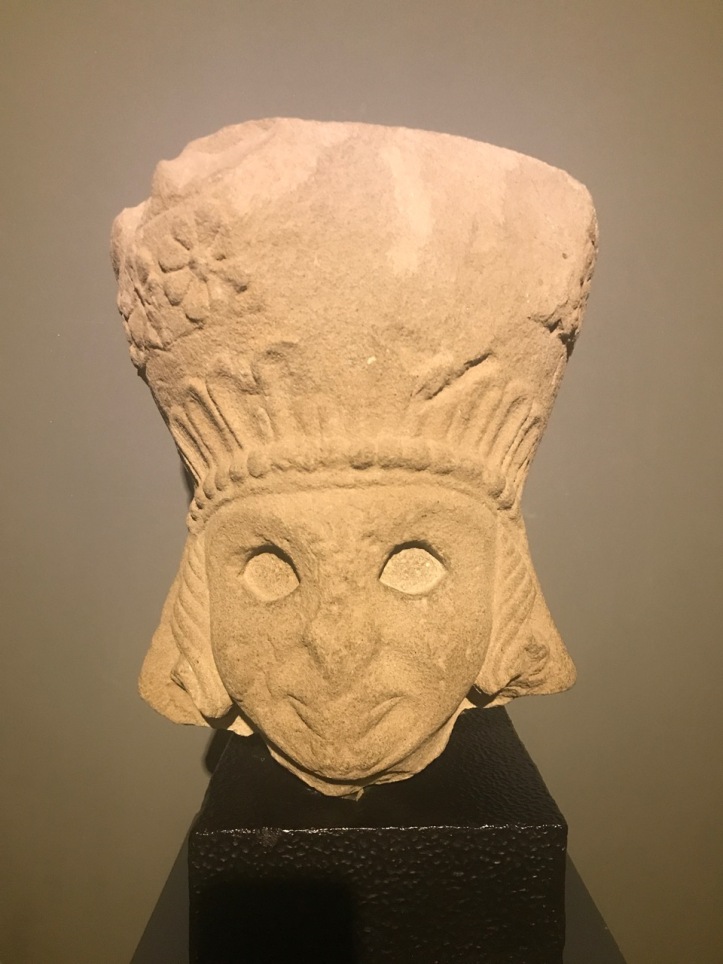 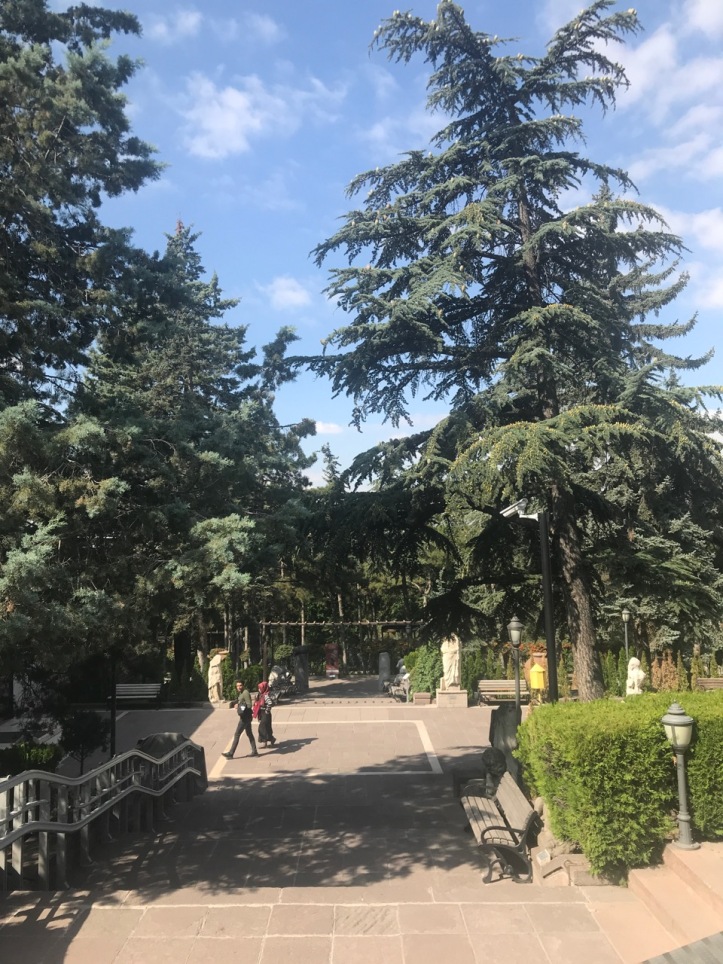 If you want to spend longer in the area, the area around the museum is Ulus, which has a lot of shops and fun streets to wander. Much of it is cobblestone, so trickier for strollers, though we did see some.

What is it? Old castle ruins to climb around

How We Reached It? We took a taxi to “Ankara Kalesi” and it brought us to the entrance of a cobblestoned walking area—“Ankara Kale Kapısı  vs Saat Kulesi” (https://goo.gl/maps/nDjdreebhJy5iXV76). 60 TL from Park Oran. From that gate, walk up the hill until you get to a T intersection. Turn left and follow the road under a gate/arch. You’ll then see stairs on the left going up. Go all the way up the stairs and you’ll hit the castle entrance.

Toilets? Not directly at the castle, though I saw signs nearby.

Stroller Friendly? No, though we did see one there! It is a rough cobblestone walk up to the castle and then steep steps to climb and walls to walk on

How Long to Visit? The castle itself only takes about 20 minutes. There are lots of little shops to wander around, some interesting restaurants, and a pretty fountain square to sit by to add time.

Parking? Appeared to be a lot near the base. Pass the gate mentioned above and veer to your left and there was a lot at the base of the castle hill.

Notes: The views are great from the top—picky a pretty day for best photos! There are steep steps, no railings, and plenty of places to fall off. That being said, our kids 3.75 and 6.5 did great. If yours will hold hands and follow directions, it is fine. They really enjoyed the street musicians playing in the courtyard. The fountain square near the outer Castle Gate is a great spot for eating a snack.

What is it? Well done museum covering local history from the Paleolithic era to the classical period

How We Reached It? We walked downhill from the Castle (don’t go the opposite route—steep hill!). Taxi about 60le from Park Oran

Toilets? Yes, clean toilets in the left side of the garden when facing the main door; can also access from the inside cafe

Stroller Friendly? Somewhat. Some of the steps have ramps and some don’t. So you’d need to be able to carry the stroller up/down up to about 10 stairs at a time. Inside is wide and maneuverable

How Long to Visit? We were there about an hour. It is not huge, just one floor. However, we didn’t read many of the signs because of the kids’ energy. I’d say 2 hours max.

Parking? There was a small parking lot near the museum

Notes: Well done museum with signage in English and Turkish. Larger signs explain the time period and smaller signs explain the objects. Interesting displays and the kids (3.75 and 6.5) enjoyed the artifacts. There were also a few cool interactive computers they liked. Outside had a garden space with artifacts. Good gift shop outside and an inside cafe with a few sweets and drinks and an outside cafe with a bit more to offer.