A Day Trip to Amasra, Turkey with Kids

The Black Sea town of Amasra is a great day trip from Safranbolu (for my post on that, see here), or a fun destination for a weekend. Formerly called Sesamus in the 6th Century BC, it became fairly important in the 9th century AD before being destroyed by Arab raiders and later rebuilt by the Genoese. Amasra had trading advantages due to its coastal location and the Genoese used the Byzantine’s castle and harbor. In the 14th century, the Genoese built 2 more fortresses, remains of which can be seen today. In 1460, the Ottomans took over the city. 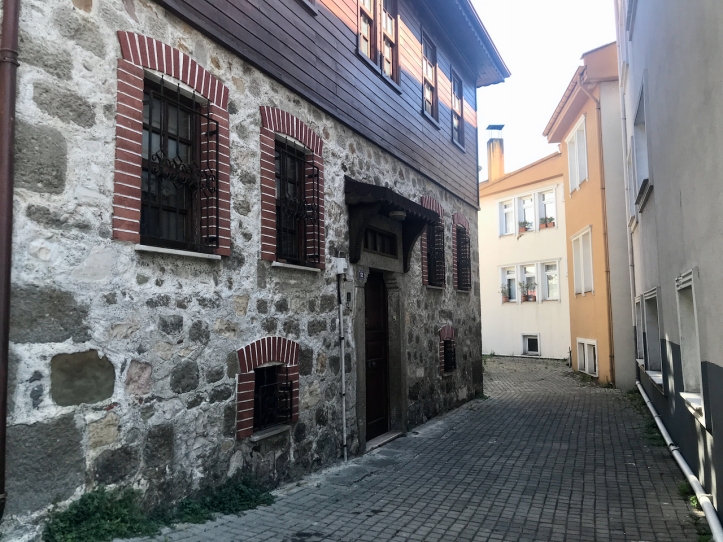 Now, it is a very picturesque seaside town with 2 small, sandy beaches, great views, a harbor, quaint shops, archaeology museum, playground, and delicious seafood restaurants. Its official population is about 6,600 people, but in normal summers that can explode over 25,000. This, of course, is not a normal summer. While there were definitely people around, it was not packed except for Büyük Liman Plajı (Big Harbor Beach).

We drove to Amasra from Safranbolu for a day trip. It is 1.5 hrs north of Safranbolu, with most of the route on rural, winding mountain roads. Some stretches the trees formed beautiful arches over the road. In fact, on our drive home, we encountered probably 5-6 brides getting their photos taken on the road! Each time a car came, they scurried off to the side before going back to the middle of the road!

We parked at the southern end of the downtown Amasra area (just south of the Bim supermarket on the map above) and walked through town. We walked to the Amasra Castle and Fatih Mosque. There is not much left of the castle–just a wall and arch. The mosque is pretty and the views from the top of the stairs leading up to that portion of town was nice. 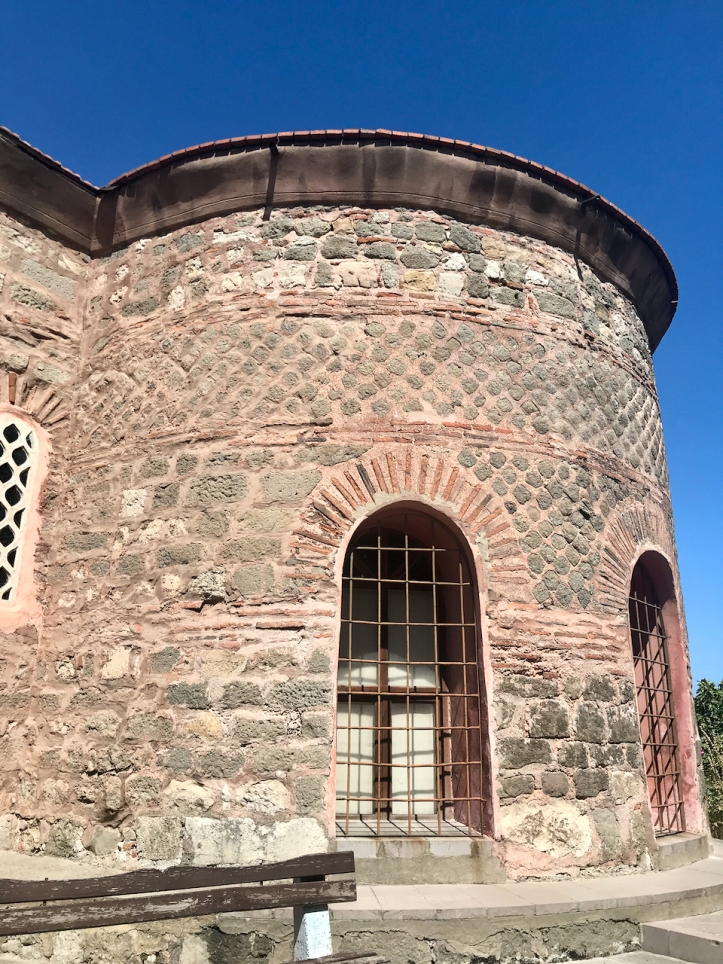 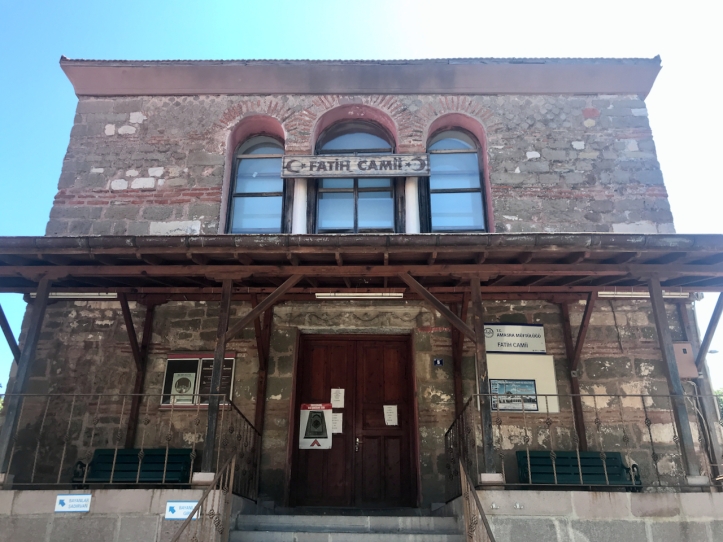 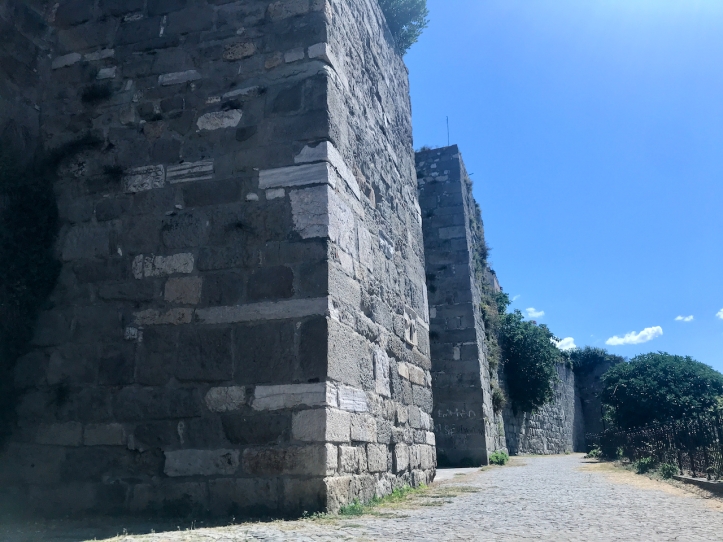 Then we headed to the connected island at the north end of Amasra. We walked across Kemere Köprüsü, the 9th century Byzantine-era bridge that connects the two parts of Amasra. This island is a small mountain, so it’s a (slightly) harder walk than the downtown area which is pretty flat. 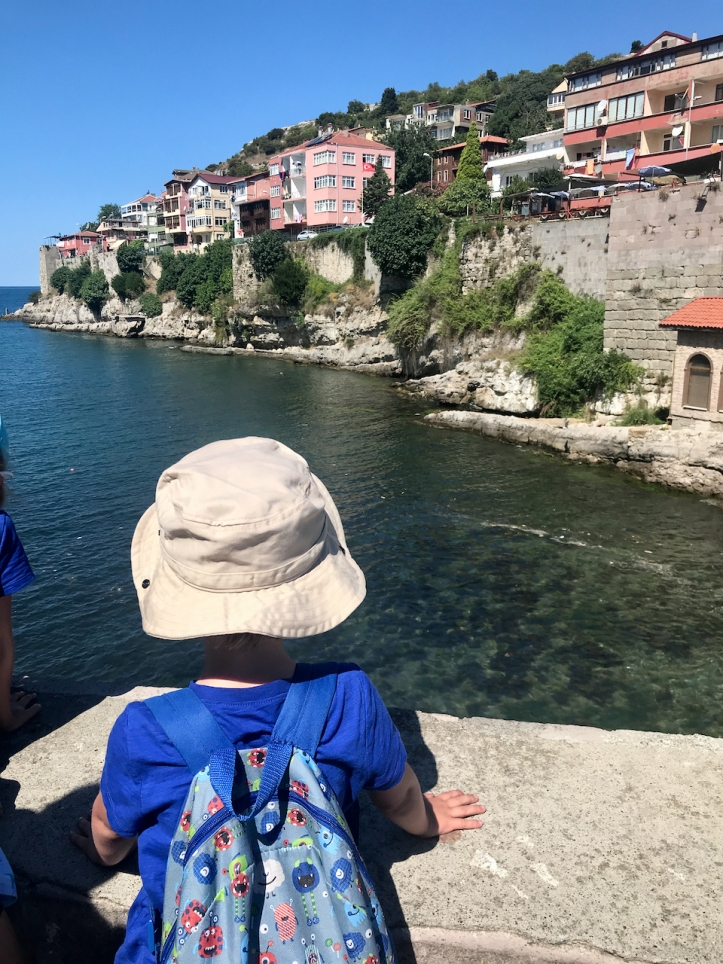 We headed to the northern point (to the spot labeled Ağlayan Ağaç on the map). There is a small cafe for drinks and they have benches and tables overlooking the Black Sea and another island. DH got a Turkish coffee and I got a cold water and the kids had their packed snack.

While it was warm, it wouldn’t have been too bad except for the mask wearing. Masks are required in public areas where there are other people and in all inside shops/stores/restaurants except when eating. So we appreciated our food/drink breaks as a chance to remove our mask. There were few enough people that sitting outside having a snack still felt very safe without our masks.

After our snack, we walked up a rough road/path to the very top of the mountain for some more views. Then we headed all the way down back to the bridge and crossed into the downtown area.

(Side note: If you are renting a house or staying somewhere on the island side, there is a VERY narrow, tight tunnel/arch you have to drive through. Cars fit, but possibly not big ones!)

Swimming and beach time was not our goal for this trip, but the kids still wanted to touch the Black Sea, so we went down to the beach to stick a finger in! Amasra Beach is near the parking lot just west of the Amasra Museum and had chairs and umbrellas to rent. A public bathroom was nearby, though it only contains squat potties. No beach showers that we could tell, though there were definitely people inside the squat potties using the traditional spigot and bucket for washing themselves off. Beach is sandy and waves are nonexistent.

Next up was lunch time! There were many restaurants to pick from, but we decided to chose a more traditional building in hopes of Western toilets. While I don’t mind a squat potty, DD7 was horrified at it and I was really hoping to find a toilet she was used to. Clearly, we need to practice our squat potty skills!

We chose Çınar Balık Restaurant and had some great food! We were the only ones eating there (definitely a sign of Covid) and had a table right by the open windows with a beautiful view of the sea and coast. DD7 got grilled chicken with rice and French fries, DH got Izgara Köfte (Turkish meatballs), and DS and I shared panfried salmon. DH and I also got a salad. Very delicious food, nice service, great views, and Western toilets–a win all around!

We’d promised the kids some playground time, so we headed over to the town square area and they played for a while. Had some decent shade, benches around the playground, and the kids enjoyed climbing around for a bit. There were some booths nearby with jewelry, clothing, magnets, and crafts that I explored while they played.

On the other end of the square was the Amasra Museum. We used our MuzeKart for entry (this card gives residents, including foreign residents and diplomats entry into museums across Turkey for a year for 70 tl, a great price. You can buy it at many museums). If you’re buying a ticket, it was pretty cheap–I think 10 tl or so?

It is a small museum, but well laid out with English and Turkish signs. Worth a visit (and had Western toilets). 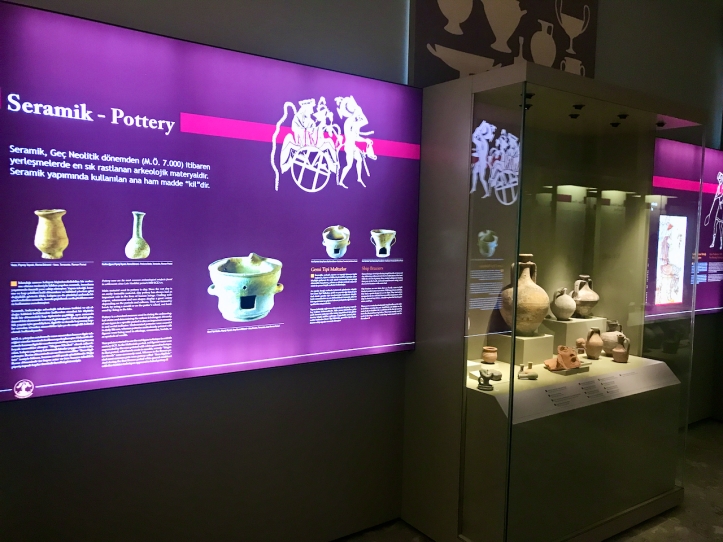 Across from the museum was a dondurma shop! Dondurma is Turkish ice cream. It includes mastic and a few other ingredients that make it stickier, a bit harder, and more melt resistant than US ice cream. Tip: Sade means plain ice cream, which is essentially vanilla. Chocolate is çikolata and strawberry is çilek. Limon (lemon) is also pretty good! The “ç” letter is a /ch/ sound.

We ended our day with a walk through town, past the harbor, and down the pier. Some families, and especially teens/young adults, used the pier as a swimming spot. You have to climb down onto some rocks to then jump into the sea–no beach here! 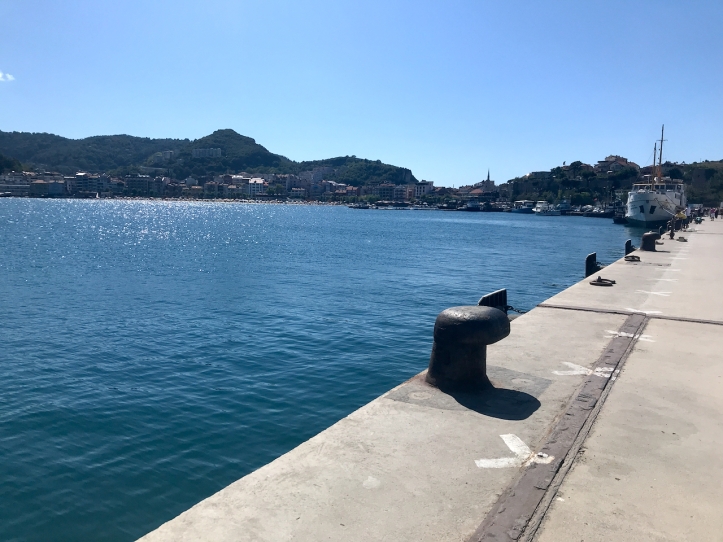 Overall, we were in Amasra from about 10:30 am to 4 pm and hit all the highlights except the beach. If you’re going to swim AND explore the town, I’d suggest an overnight or get there earlier!

Location: Amasra is on the Black Sea between Istanbul and Sinop.

What to Do: Walk around the town! The Amasra Museum is cute and worth a quick visit (will take you less than 30 min). You can easily walk all over the whole town in just a few hours. The two main beaches are Amasra Beach on the western side and Büyük Liman beach on the eastern side. When we were there Büyük Liman beach was more crowded. There are many cute shops, some great views, and a playground.

Bathrooms: There is a public bathroom near Amasra beach and the playground. It cost 1.5 tl to use and was squat potties. I imagine there is another public one near Büyük Liman beach, but we didn’t see it. At the top of the hill on the northern island, there appeared to be porta potties for emergencies. The Amasra Museum had a western bathroom and the restaurant we ate lunch at (Çınar Balık Restaurant) also did.

Strollers: Streets varied from cobblestone to pavers. Some areas had sidewalks. Strollers would be doable in many areas as long as you’re prepared for some rough surfaces.

Beach Info: I did not see changing or shower facilities. Beaches had chairs and umbrellas to rent and the beach was sandy. We saw some trash in the water, but the swimming areas looked decent. Few to no waves as both beaches are protected inlets.

Playgrounds: There is a nice playground in the downtown square area. It has shade, benches, and some nice features. It is at the southern end of Baris Akarsu Parki on the map.