Kids and I explored the Pharaonic Village today in Giza, just across the Nile River from the Downtown area. It is situated on an island and is dedicated to teaching about Ancient Egypt, with a few areas on more modern aspects and modern culture. It is a bit cheesy and parts are a bit worn, but we had a really fun time. 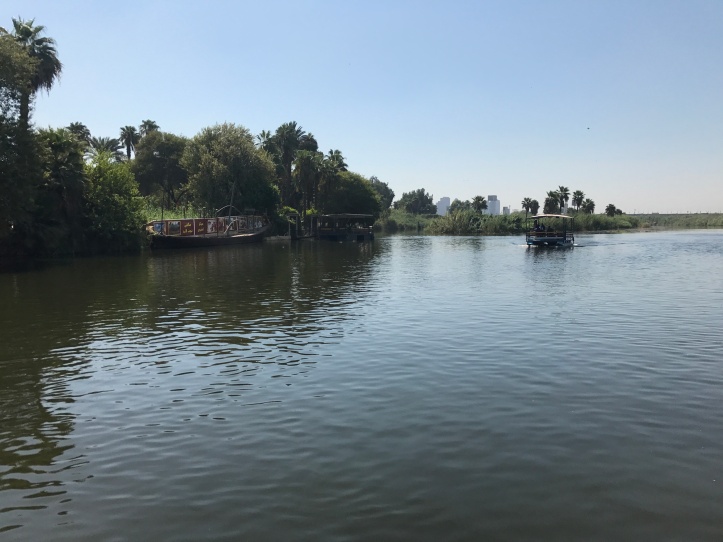 After getting our tickets we waited in a cafe for a few minutes before heading out to the boat that would take us on the initial tour. They divided they boats up by language, and we were the only English speakers so had a boat to ourselves! 50 seater all to us!  The boat ride was really cute. They had an audio tape describing the different scenes as we worked our way along the water canels. It started out with a history of various Ancient Egyptian Gods while we saw their statues and then shifted to live reenactment scenes where people acted out different things the Ancient Egyptians did—like play games, till the fields, catch fish, make pottery, make papyrus, etc. DD really enjoyed seeing the scenes and it made it more real for her to actually see real people doing it.

When we got off the boat ride, we met up with our guide. We had her to ourselves as well! I had a leash on DS so he could walk without running off and he did so much better with it this time than last time we used it when he’d run and then fall backwards when he hit the end of the leash. We walked through a replica village and got to see a temple, rich man’s house, and a poor man’s house. It was all very interesting. Then we had a break at a cafe. I had brought snacks for us, but the menu looked pretty good too.

Our next stop was round one of shops. I bought DD an adorable little purse for about $1.10 that has a zipper and fits all her lip glosses and is decorated with ancient scenes. It also has a shoulder strap which makes it much easier for her to wear around than her little handheld purses. Next time we may actually buy more things as their papyrus selection was great.

Then we checked out King Tut’s Tomb—not his real one obviously, but a really good replica. In actuality, his artifacts are at the Egyptian Museum and his tomb is in the Valley of Kings near Luxor. But this had the artifact replicas inside the tomb’s rooms so you could see what it was like when it was discovered. That was pretty cool. It really is amazing how much they buried with their kings to support them in the afterlife. 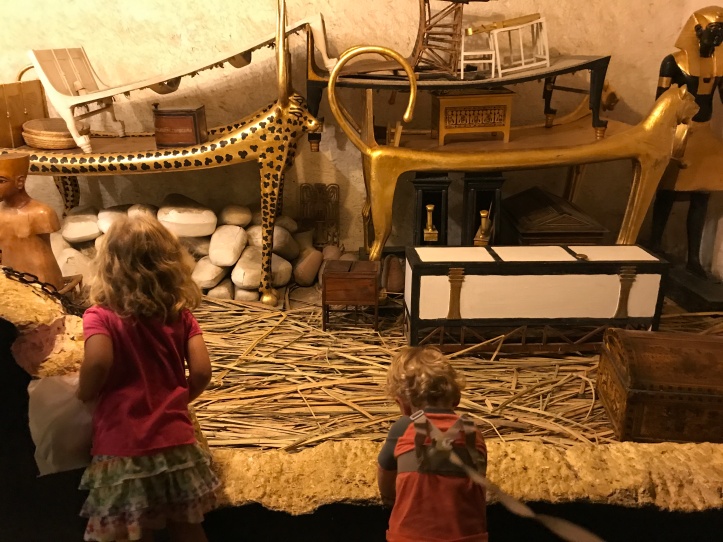 Afterwards we went to the Art Cafe so DD could do an art piece. They had various little plaster things to paint that came from molds. DD bipassed the Egyptian themed ones and picked….Minnie Mouse! Oh well, she enjoyed painting it and DS enjoyed the fish tank. It was a cute set up and they even had art smocks for the kids and little chairs and pint sized tables. Definitely a fun little break from the heat and history. 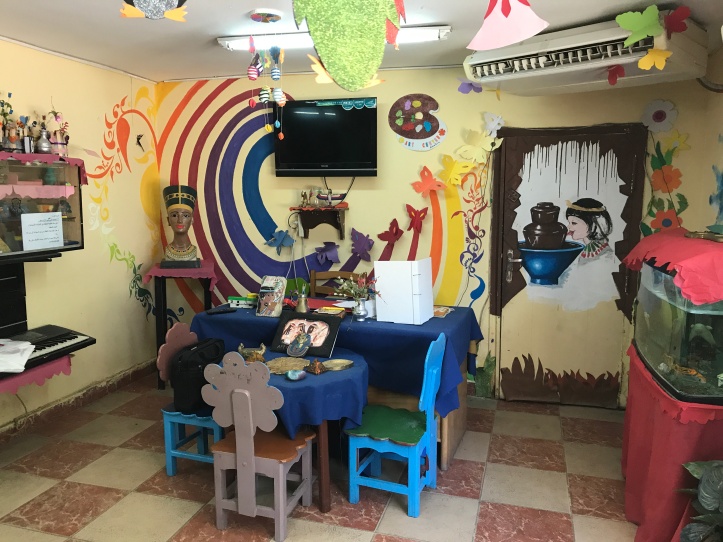 Our tickets gave us access to three of their museums…they have about a dozen small (mostly one room) museums on a range of topics. We ended up only doing as the kids got tired. You know he needs a nap when DS keeps putting his head on your shoulder and then nodding Yes vigorously! The Pyramid Museum was interesting—they had models of different pyramids and how they thought they were built. We had a tour guide in each museum who explained the items and answered questions.

We did check out the petting zoo, but it was small, depressing, and only had a few sad animals. Not definitely nothing like it was hyped up to be and fairly disappointing considering how nice the rest of the area was. The playground was also less than stellar and we avoided. 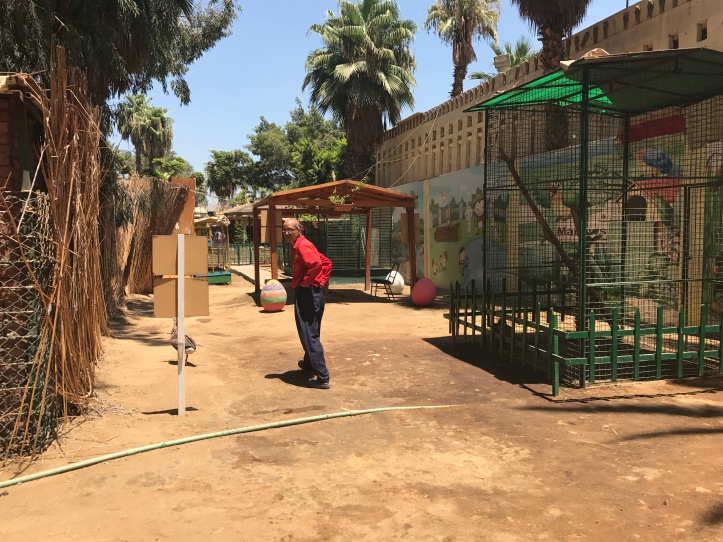 Location—easy to find on Google Maps, it is in Giza, on the Nile River just across from the Downtown Area.  It has a parking lot and would be an easy taxi drop off as well.

Tickets—Various prices depending on your package. Adult tickets start at LE270 ($15 at time of writing) and go up to about LE500. Kids have a discount (I think 20% less) and little kids are LE45 for ages 3-5 and free under 3. We did the cheapest package which included the initial boat ride, the village tour, King Tut’s tomb, 3 museums, the art cafe, petting zoo, and playground. This was more than enough with little kids and took us about 2.5 hours and we only did 2 museums. Larger ticket packages include more museums, a 1 hour Nile yacht ride, and/or a meal at King Tut’s Restaurant (you can buy food at the cafes without a ticket).

Stroller Ease—Grounds are stroller friendly and even have ramps. Boat you could easily get on with a single stroller, side by side double would be too wide.  Some museums are ground level, but some (and King Tut’s Tomb) require lots of stairs.

Bathrooms—Plentiful, clean, with TP and soap.

Food—There are two cafes-one at the entrance and one in the middle after the village part of the tour. Menu looked extensive and reasonably priced at the middle cafe. You can also bring in your own food and drink.  One ticket option includes a meal at King Tut’s Restaurant.

Overall Feel—very nice grounds and easy walking (though stairs up to some museums). I carried my toddler some and had him walk some and it was fine. Boat has good railings. Everyone was very helpful and friendly. Only confusing part was where to start the process after getting your ticket—go inside the cafe and they will check your ticket there.  Be prepared to show your ticket at every location-keep it in a handy spot.  Really cute spot to learn about history in a visual way.

I am a mama to two little ones, a travel and nature photographer, and an avid explorer of the world. Here you will find travel tips, recommendations, awesome photos, and musings of my life and trips abroad. A few terms I use a lot on the blog include DD (dear daughter), DS (dear son), and DH (dear husband). If followed by a number it indicates their age in years.