We recently did a 3 night trip to Aswan, Egypt as a family. I’ll be writing about the different things we did in other posts, but wanted to started with a review of our hotel, the Movenpick on Elephantine Island. 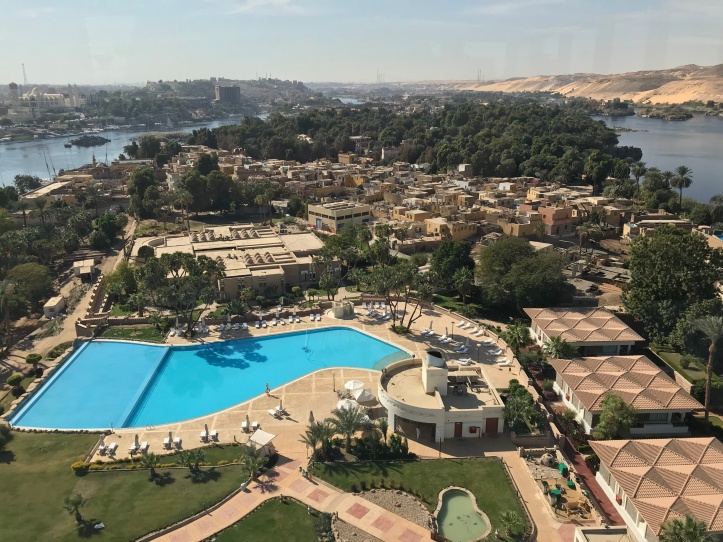 The Movenpick is a 5 star hotel with locations in Europe, Africa, the Middle East, and Asia. There are a number of their hotels in Egypt. We booked a 2 bedroom family villa with partial Nile view. We really prefer 2 bedrooms and a living space when traveling as we all have different bedtimes. This ensures no one wakes the others up. DD sleeps in one room, DS is in a crib in our room and we have the living room for adults to hang out in when the kids go to bed.

We booked the Movenpick online through their own website. That process was smooth. Trying to arrange airport transfer took a bit more work. I emailed them using the email address on their website and in the booking confirmation and never heard back. When I called, I was transfered to a number of different people before reaching a woman who said she never got the email. We come to realize that transportation bookings go through an email address not listed anywhere. I guess you have to magically know! Considering they require the request to be in writing and not over the phone, you’d think they’d publicize the email well. For those of you arranging transportation, use: Resort.Aswan.GuestRelation@movenpick.com.  It cost $35 each way, which is much pricier than a taxi but made for smooth transfer and plenty of space (it was a mini van).

The hotel is located on Elephantine Island. Cars head to the dock on the mainland of Aswan and then you use a complimentary private hotel boat to transfer to the island. Boats run continuously, so you never wait more than 10 minutes and we mostly waited 5 minutes or less. There are two wings to the hotel, though they are completely separate buildings. The new wing is on the farthest north part of the island and just south of it is the Tower wing. We stayed in the Tower wing, though we walked the grounds of the new wing and DH used the gym which is inside the new wing. The gym was smaller but had everything you’d need to work out. Both wings have pools and you can use either. 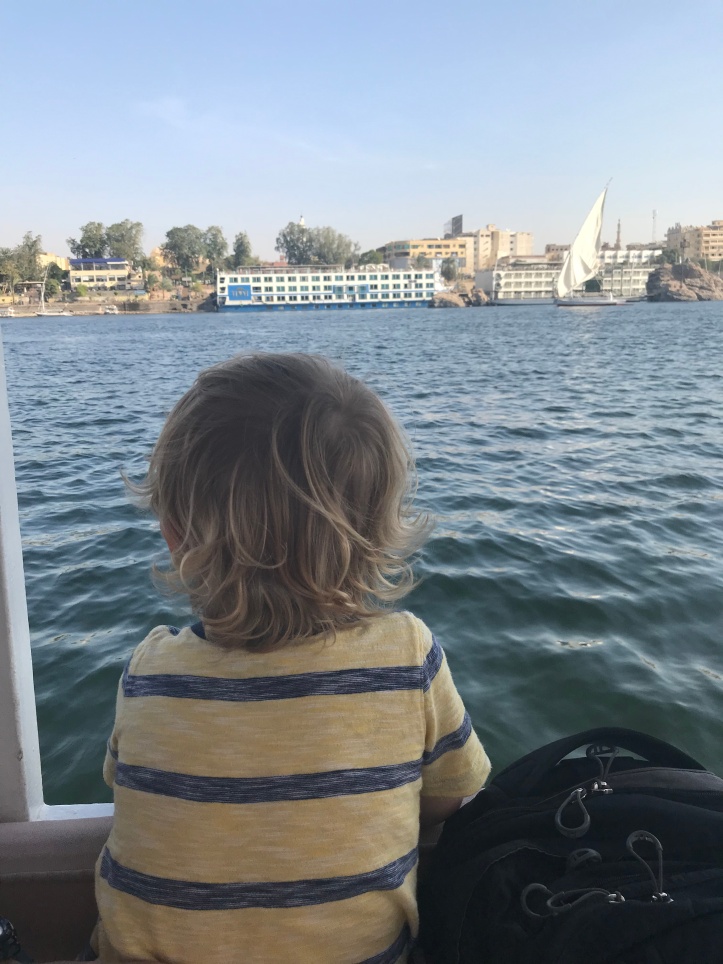 Checkin was smooth, though they claimed we got a free upgrade to the villa. I thought we must have booked a suite and then were given a villa, but afterwards I checked my booking and we had booked the villa. So I don’t know where the upgrade part presumably came from. However, the villa was lovely with plenty of space.

The master bedroom had a king bed, tv, desk, mini bar and lots of closet and storage space. The master bathroom was very large with a tub, shower, toilet and 2 sinks. The toilet had it’s own room and door-except the door was glass! Not sure why they’d put on a door and then make it see through. We also had problems with a lack of hot water in the shower and tub two mornings in a row. They’d fix it and then it would stop working again. From the master bedroom there was a terrace with partial Nile views that was quite lovely. 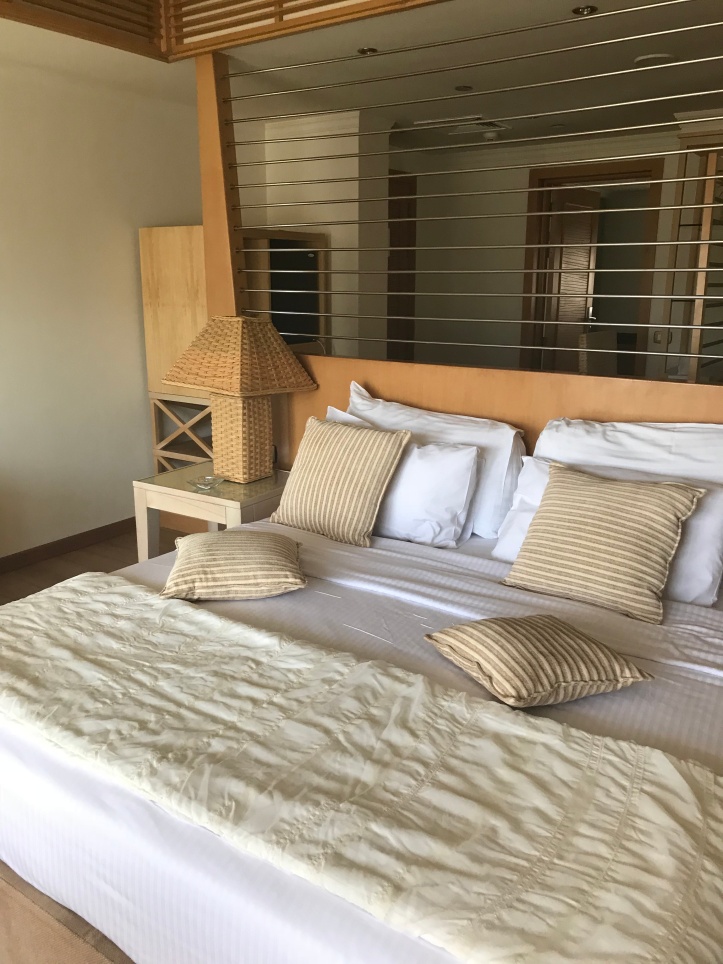 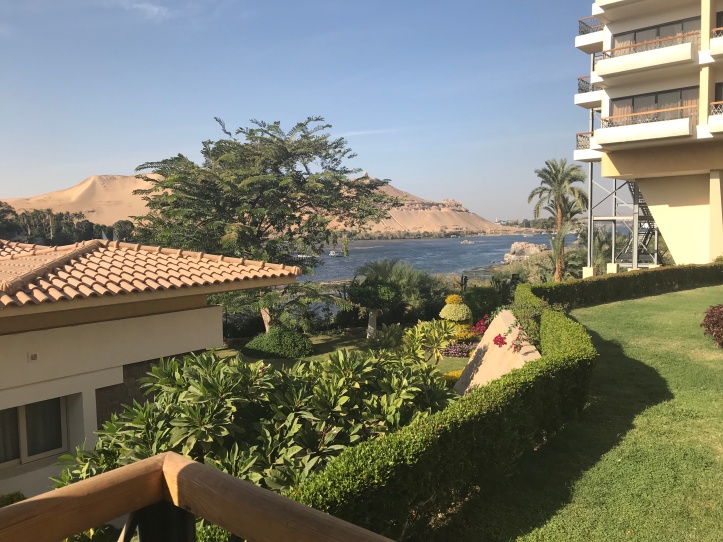 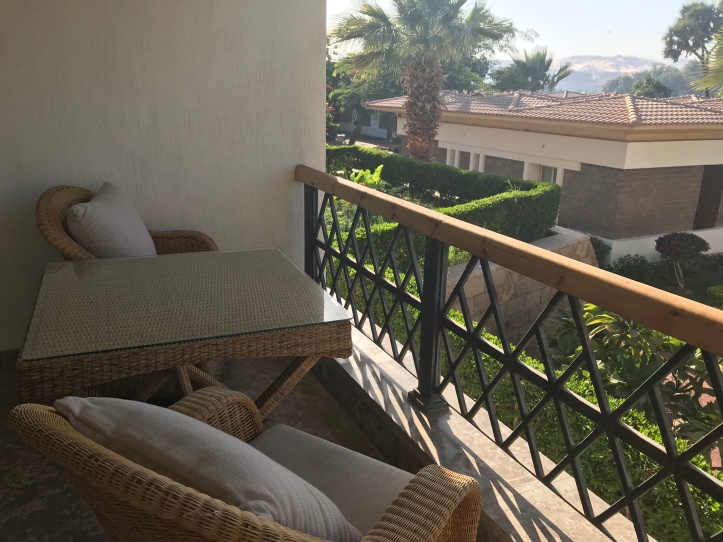 The 2nd bedroom had 2 twin beds, dresser, and closet space. Its bathroom had a shower tub, sink and toilet all in one room. The living area connected the two bedrooms and had a seating area and dining area. My main complaint for the villa is they claimed to have a kitchen area on top of the dining area. What this really meant was simply a tiny mini bar fridge. No microwave or anything else. When we stayed at a Four Seasons in Egypt their kitchen area include mini fridge, microwave, kitchen sink and even a stove top with 2 burners. Lack of microwave in particular was frustrating as we ordered room service a lot for the kids and would have liked to warm up left overs the next day. 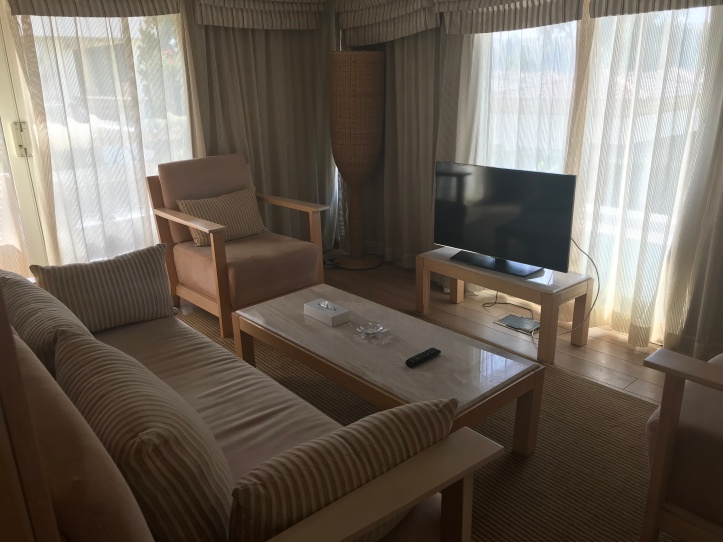 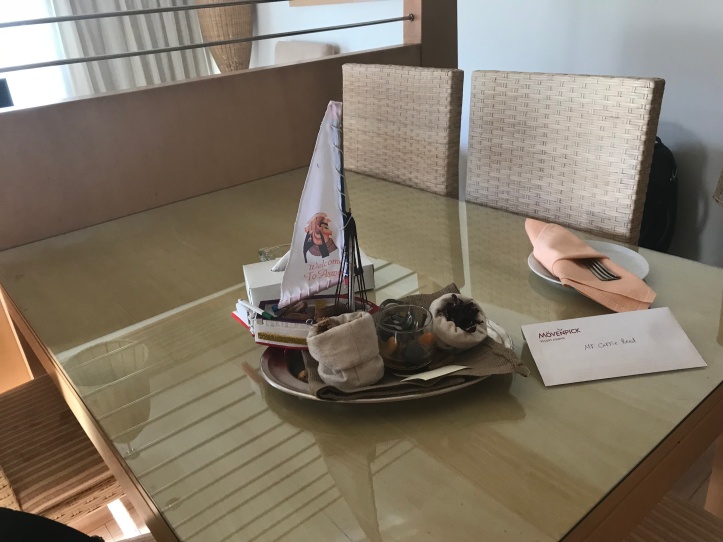 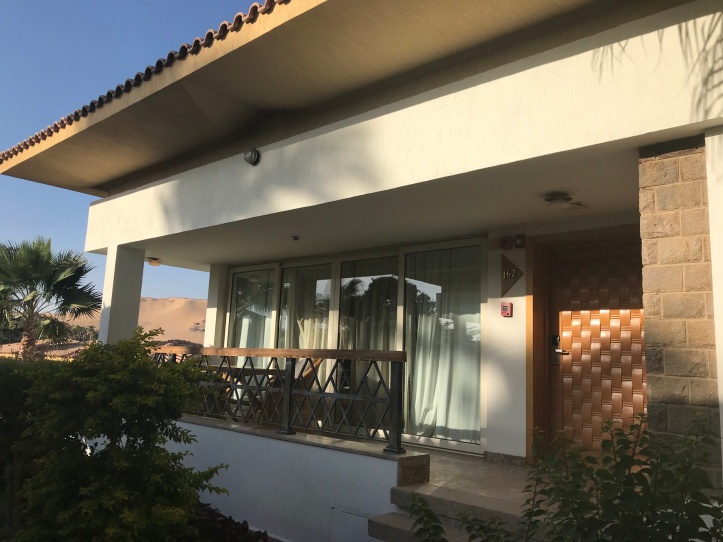 For dining, we attempted to eat in the main dining room for dinner. We confirmed it was open all day for a la carte meals, though buffet dinner was 6:30-10:30. However, when we arrived at 5:45 we were informed a la carte food was only in the lounge area. This made for awkward eating with the kids. We did room service the other nights. Room service worked very well. Took about 30 minutes each time and they have a pretty extensive menu. Kids menu had a good range of food and they were happy to mix it up for us (we requested pasta with marinara and grilled chicken which essentially combined two menu options). The caprese salad was great, as was the schwarma wrap. The fruit platter (from the adult dessert menu) was massive. 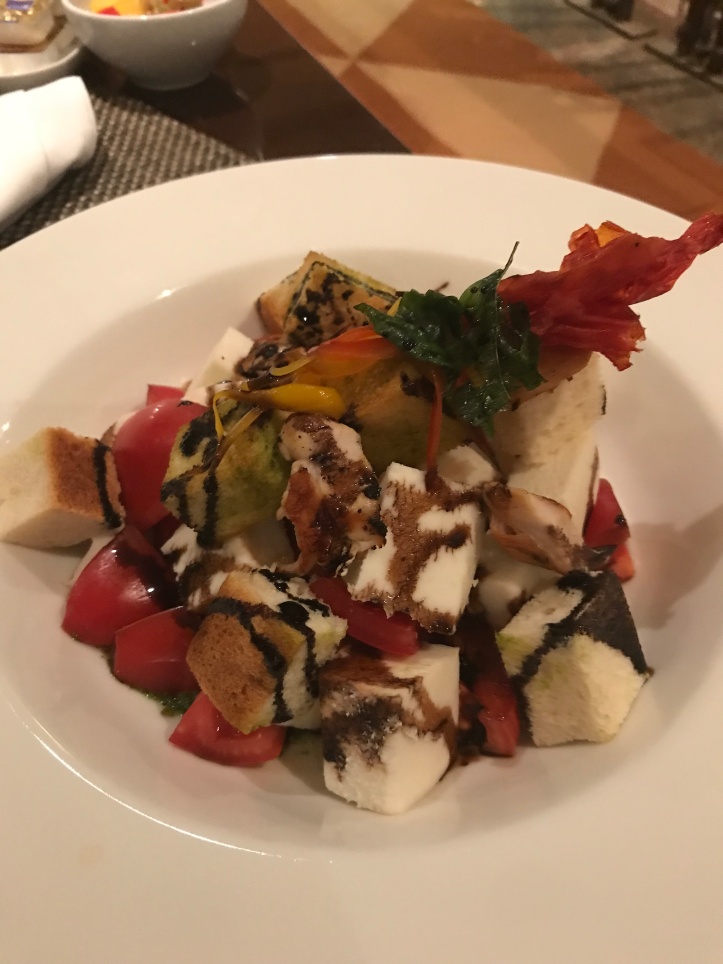 Breakfast buffet was included and had a decent spread. Made to order eggs/omelets, a variety of hot items, large fruit selection, salad bar, many pastries and breads, variety of yogurts, and some Egyptian breakfast items.

From our hotel, we wanted to walk through the Nubian villages to the archaeological ruins on the other side of the island. The front desk worker showed us the gate in the back to the path that led to the villages. Path might be too optimistic a word. It was more like a narrow ledge along the foundation that led to a rusty gate. Not what I would expect from a 5 star hotel.

Feluccas are easy to arrange from the dock at the hotel and we did a sail around the island. Wind died and it took forever, which was not their fault, but something to be aware of.

We were overall pleased with the hotel and the room accommodations were comfortable. I would have been thrilled if they’d had a kid play area (they appeared to have a kids’ club, but it was never open). We would stay there again if we return to Aswan.

Rooms: Family Villa worked well for our family of 4. Master bedroom with king, 2nd bedroom with 2 twin beds. Both with attached bathroom. Both with space for a crib. Separate living room had a table and chairs, plus sitting area. “Kitchen” only included a mini fridge and table/chairs. No microwave or stove top.

Pool: Lovely pools, no kiddy pool. One pool at each wing.

Kid Club: There is a Kid Club, but it was not open when we were there. Verify ahead of time.

Kid Highlights: My kids loved the ferry that took us to/from the hotel’s island. Very little wait time and fun to ride. You can also get a felucca from the dock for a casual sail on the Nile. Also enjoyed the views from the top of the tower and eating room service on our balcony (which had a table and chairs)