We got over to a place I’ve been wanting to explore since we got here in June–the Children’s Civilization and Creativity Center in Heliopolis. Better known as the Children’s Museum, it focuses on Egypt past and present and includes a garden park with playground, hands-on museum, and activities. Heliopolis is a bit of a trek from Maadi (about 40 min without traffic) and I wanted to go when we had the car and therefore carseats. But we finally made it.

We started out in the garden park as the museum was closed at 9:30 when we arrived, despite its Facebook page saying 9 am. A worker told us 10:30. So we explored the park area first. It had definitely seen better days, as statues were broken and things were closed. There was plenty of grass space and greenery, though everything was very wet as they were watering. Watering here tends to mean oversaturating everything, so if we strayed off the path, our feet went squish squish squish. Kids enjoyed seeing the peacocks in a cage and the playground. The playground was cool and shaped like rockets. It was almost completely enclosed, which meant DS could climb up high without my worrying that his daredevil toddler self would launch himself off the highest point. DD enjoyed the rope tunnel and got herself all the way around with just a little assistance.

Inside, we started off with an argument with staff about what we were allowed to see. They explained that you are only allowed to see one floor per visit. It has 4 floors, each about a different time period. It turns out that 2 of them were completely closed (the worker claims they will open next week, but I will believe it when I see it). We argued about only being able to see 1 floor as our kids move quickly through activities and of course some of the things for older kids wouldn’t be appropriate for ours. They relented, but said it was an exception. I am trying to find out from others if this is the norm, because I can’t imagine having to go back 4 times just to see the whole museum. And honestly, just one floor would not have been worth the drive for us.

DS threw several fits as all he wanted to do was sit in the jeep at the front rather than see anything else. Him and his vroom vrooms. The ground floor was about life in ancient times. There were sections on building temples, growing crops, bartering at a market, dressing up as Pharoah and more. There were also videos and interactive screens, but we skipped those due to the kids’ ages. Crop growing didn’t interest them, but DD enjoyed building the temple statues a bit. It was like giant building blocks. The market area had a bunch of produce and some large donkey and cow figurines that she enjoyed feeding. There was also a balance scale that we used to confirm which fruit weighed more. The dress up area was fun, though I think it was designed to have more to it as signs indicated dressing up in full costumes. There were fancy hats and various staffs which occupied the kids. DD loved pretending to be a queen and DS marched around with a staff and hat on. 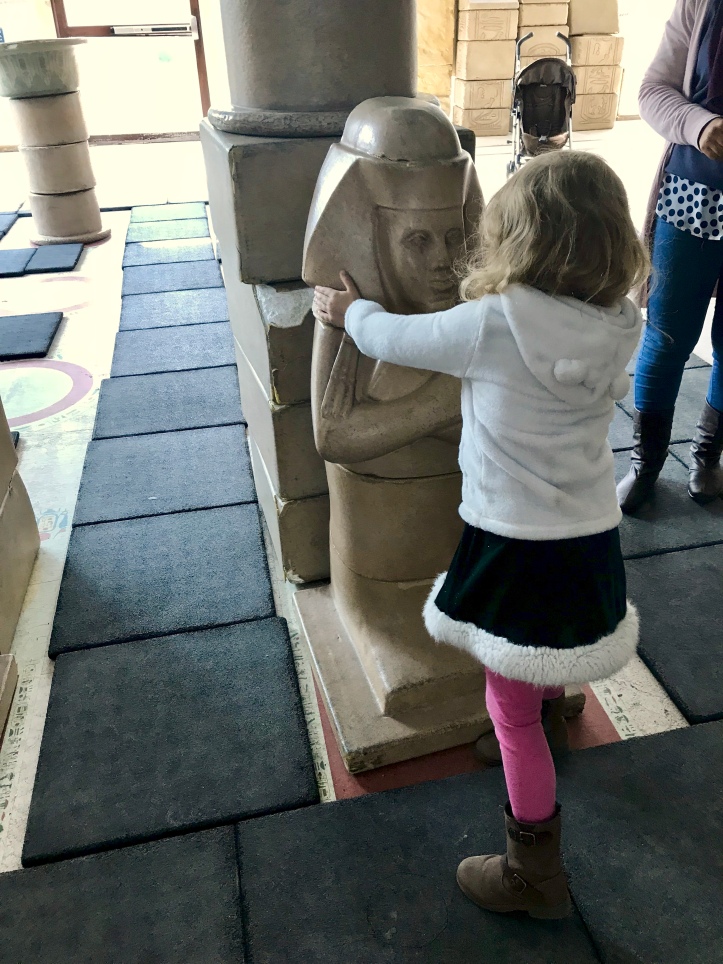 The basement floor was about discovering Ancient Egypt. It had a very cool archaeological dig area where the kids could wear explorer hats and dig with little shovels in pits and uncover statues and temple remains. The pits were filled with tiny rubber pieces that looked like tiny pebbles or sand but were soft and non sticky. They also had little brushes for brushing away the “dirt” to uncover statues. It was fun.

Another section focused on the underwater discoveries at Alexandria. There was a play submarine which DS loved and a playground structure that had you climb through the “water.” Another area had a model of King Tut’s tomb and mummy and information on mummification. The final area of the floor had art and creative projects–puzzles, hieroglyphic rubbings, etc. 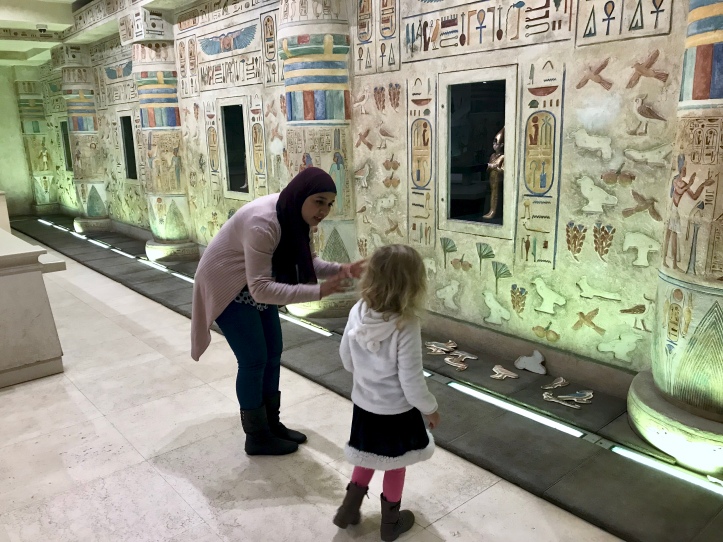 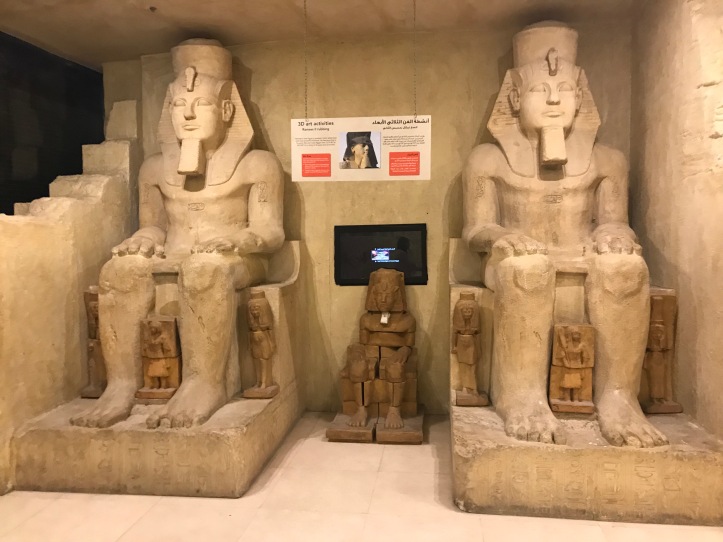 DD really enjoyed the activities. DS liked some of it, but I felt he was a bit young for most of the things. He was fine as a tag along, but it would have been a bit wasted with just him. Slightly older kids, particularly those who can read already, would get the most out of it educationally.

Location? Heliopolis; About 40 min from Maadi on a Saturday

Cost? We paid LE120 for 2 adults and 2 kids ages 4 and 2. Not sure how the breakdown was as pricing was in Arabic. This was just for the grounds and museum, we did not do extras. Communicating at the ticket counter was interesting as everything was in Arabic.

Toilets? Yes, toilet by the playground and another inside the museum. Both were clean, but bring your own TP

Food/Drinks Allowed? Sold? Bring food and have a picnic or a snack. They also had a snack stand near the playground. DS walked around inside with his snack cup and no one said anything.

Stroller Friendly? Yes, grounds have sidewalks and ramps and inside has ramps and elevators. We used ours throughout

Parking? Yes, LE10. At the gate, get out of the car and buy your tickets including a car ticket, and then drive back to the large parking lot.

I think the ideal age range is 4-10 as younger kids won’t get much out of it educational wise (though will still enjoy many of the exhibits) and older kids will find it too simplistic.