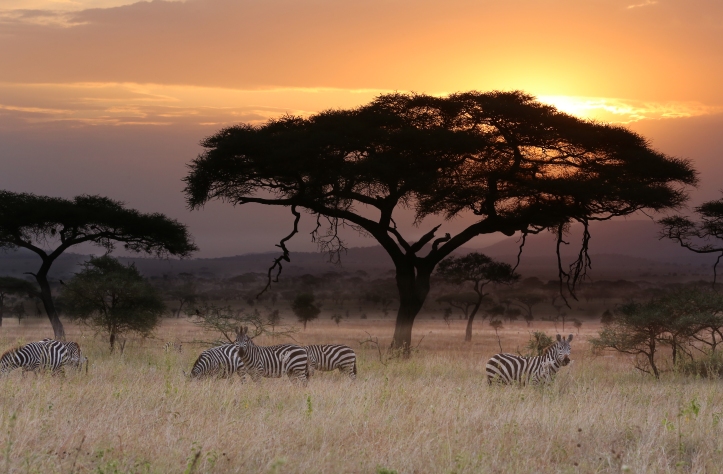 There are not words to describe the Serengeti adequately enough. It was by far the highlight of our trip and we easily could have spent longer there (we spent 3 nights of an 8 night safari). The animal life was unbelievable.

The drive from Lake Manyara took us through the Ngorongoro Conservation Area, which is a horrible bumpy, dusty, and long road. But it’s the only way by car into the Serengeti. Other option is to fly a tiny bush plane. By the time we reached the entry to Serengeti National Park we were thrilled! 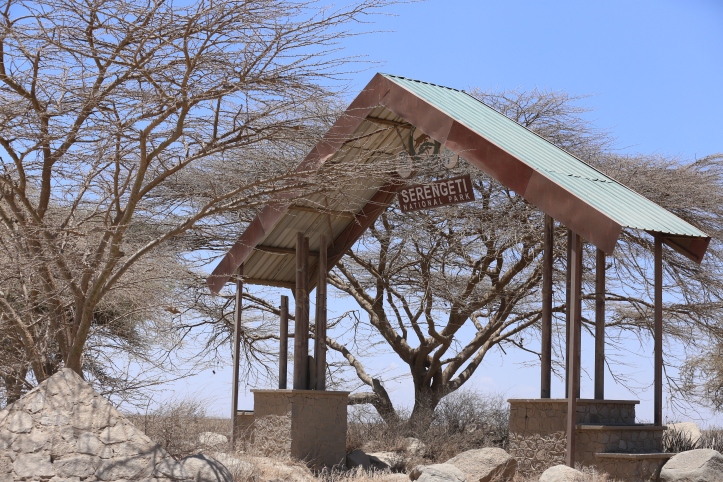 Our first day we did a game drive on the way to our lodging, Siringit Serengeti Camp. The Serengeti has everything! Lions, cheetahs, elephants, leopards, giraffes, tons of antelope and gazelle varieties, hyenas, warthogs, variety of birds, jackel, zebras, and more. There are a few rhino, but they are very hard to find (Ngorongoro Crater is a better bet for rhino). The official entry to the park (and every national park) has bathrooms, so it’s a good time to go.

The nice thing about being in a private jeep is you can set departure and return times, when and where to stop for lunch, etc. Most mornings we set off about 8 am and returned about 4 pm. But one day halfway through our trip we decided we needed a break from the jeep and a more relaxing day, so we did a game drive 9-12. We had a lazy start with some tea and coffee on the porch, hot lunch at camp, and then a real nap for DS2 in a real bed. Most days DS2 napped in his carseat in the jeep, but they were short 45 minute naps once or twice a day, rather than his typical 2-2.5 hour afternoon nap.

Thomson and grant gazelle, ostrich, 7 lions, red buck, hartebeest, giraffes, hippos in a pool, 2 hippos on land (much less common to see), topi, and a cheetah sleeping under a rock near the road. 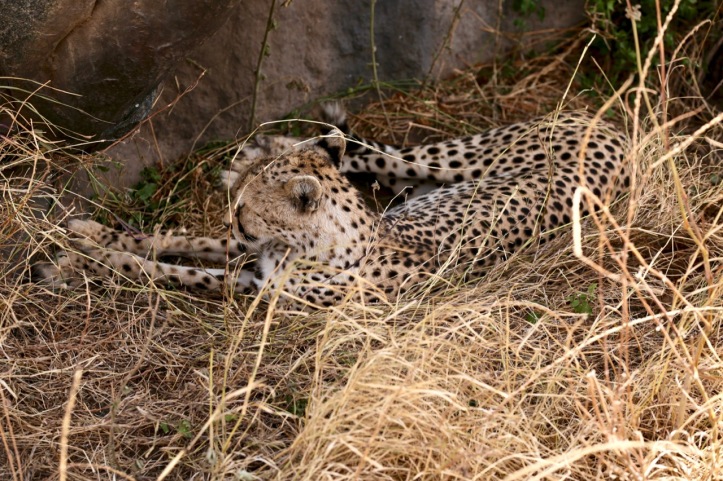 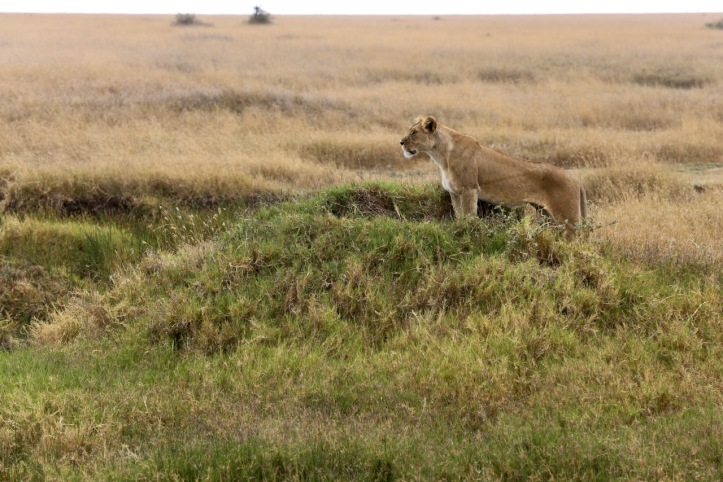 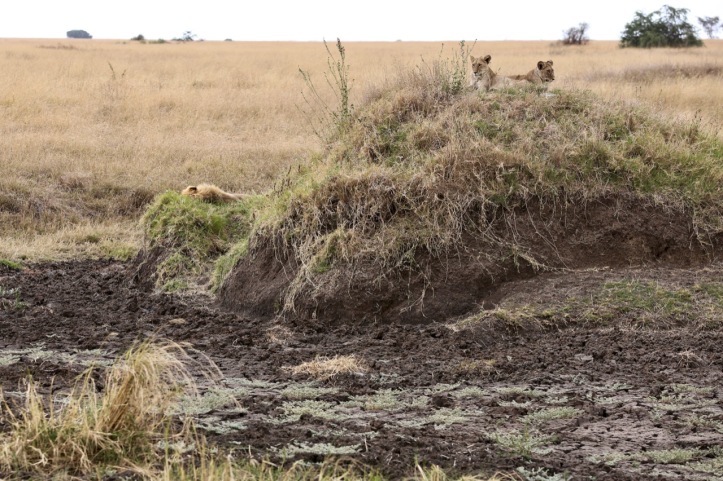 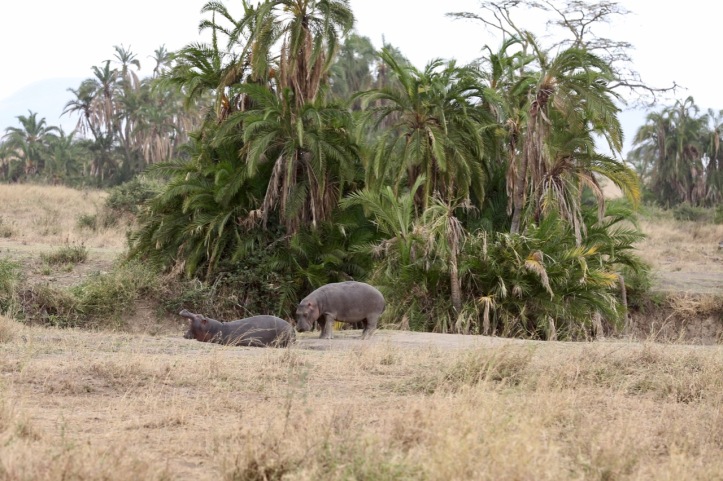 The cheetahs under the tree cracked me up. They act just like house cats! They’d roll onto their backs, yawn, clean themselves, roll around, and eventually had a little wrestle. They also peed on the tree, which caused my kids to laugh hysterically. 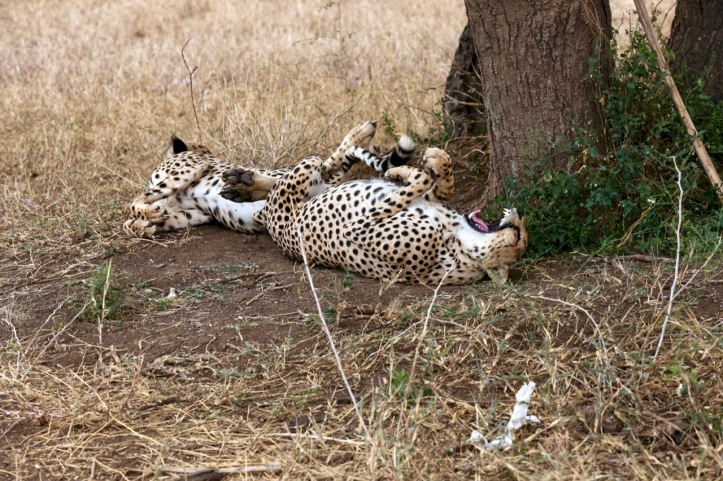 Fun big cat facts: Cheetahs do not climb trees and eat only fresh meat, not leftovers. Lions and leopards will both eat leftovers. Leopards regularly climb trees and while haul their meat up with them. Lions rarely climb trees, though we did see two in Tarangire National Park who climbed up a tree whose trunk was at a shallow angle so it was more walking up it than climbing.

We saw 2 female lions stalking gazelle and using the jeeps for cover. The jeeps masked their smell from the gazelle and helped hide them. The lions shifted between the jeeps to get close to the gazelle. Finally lion raced after a gazelle, but only for a short chase and then gave up. But then they went over to a clump of grass and pulled out an antelope leg and starting eating, so clearly they weren’t desperate for food. 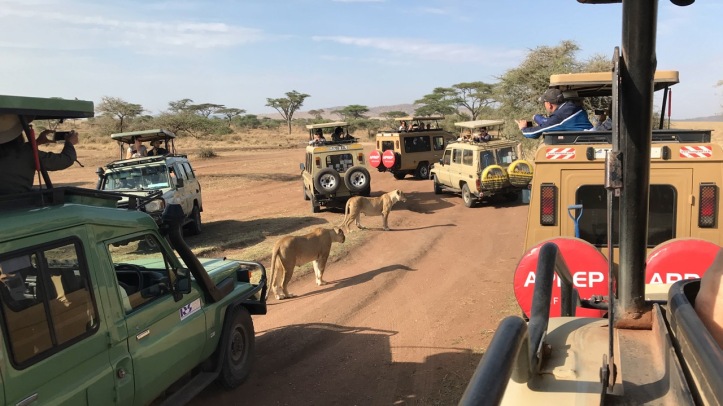 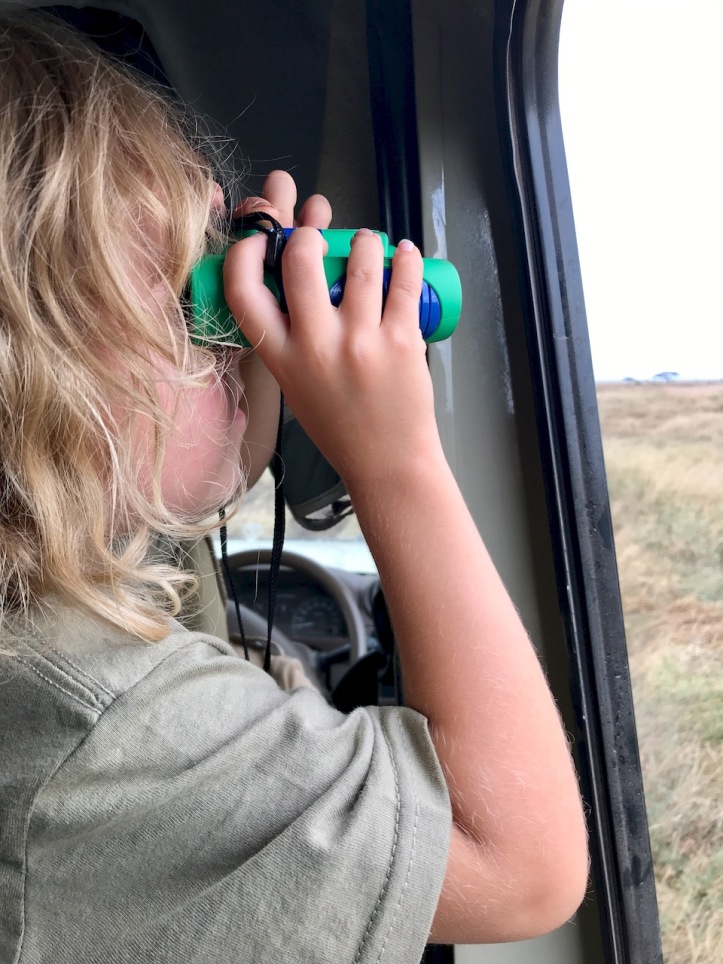 We also came across a lioness and her 2 six month old cubs sleeping under a tree. The mama lion did not care AT ALL that there were several jeeps really close to her and her babies. She was on her back snoozing away. The cubs watched us curiously, but weren’t afraid. 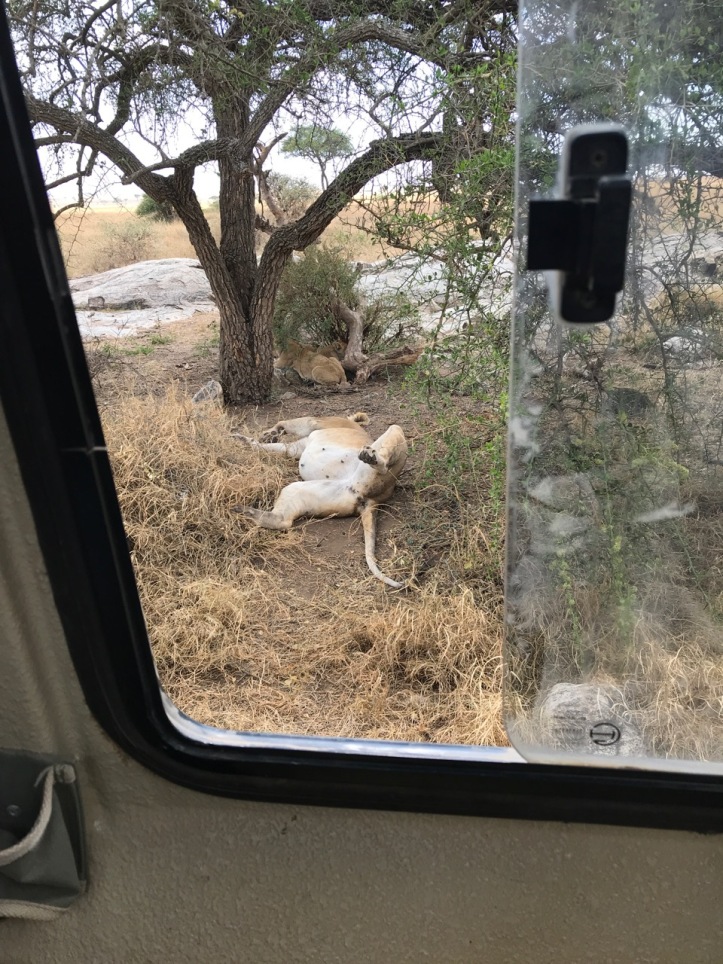 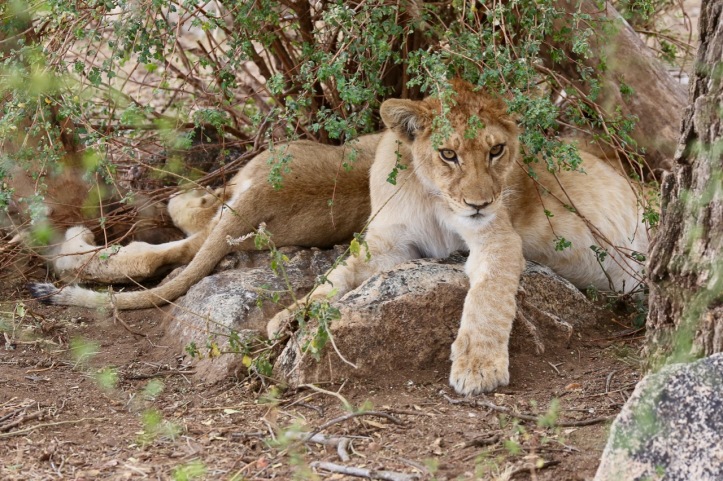 Another lion encounter was by some trees and a giant rock. There were 12 teenaged male lions sprawled on the rock and under the trees having a snooze. They were on the skinny side and clearly in need of some nourishment.  We watched them for a while and then did a loop and on our way past them again they had all woken up and were starting to walk off into the savannah.

DS2 was funny watching the lions. Not surprisingly, he didn’t have the same attention span as the rest of us. We started bribing him with cookies to keep him content and he quickly learned that when he saw a lion he got a cookie. He’d yell, “LION! Cookie please!”  He also liked to talk to people in the other jeeps. While watching the teenaged lions, I looked down and he was talking through the window to the driver of the jeep behind us about the jeeps. “This my jeep. That your jeep? You drive your jeep? This my jeep!” 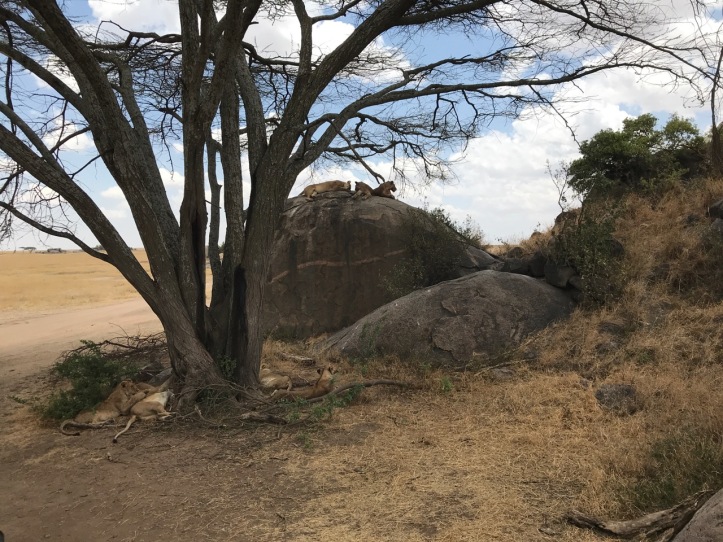 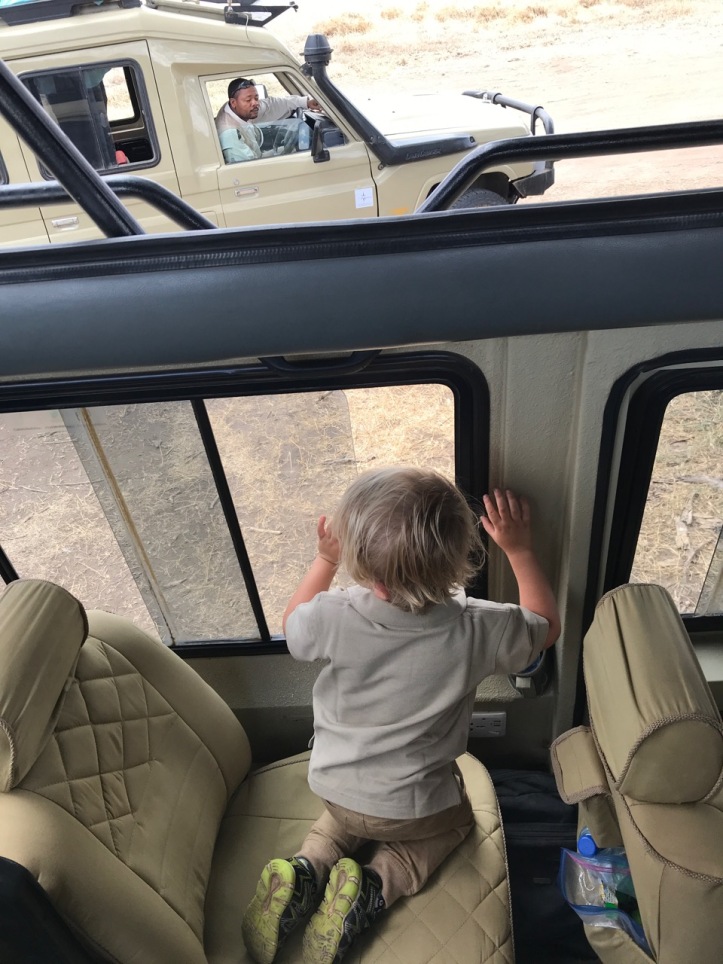 We also saw our best elephants this day with a herd split between two sides of the road. We got to park right in the middle of the herd and watch the many elephants, including numerous babies. They were so cute! 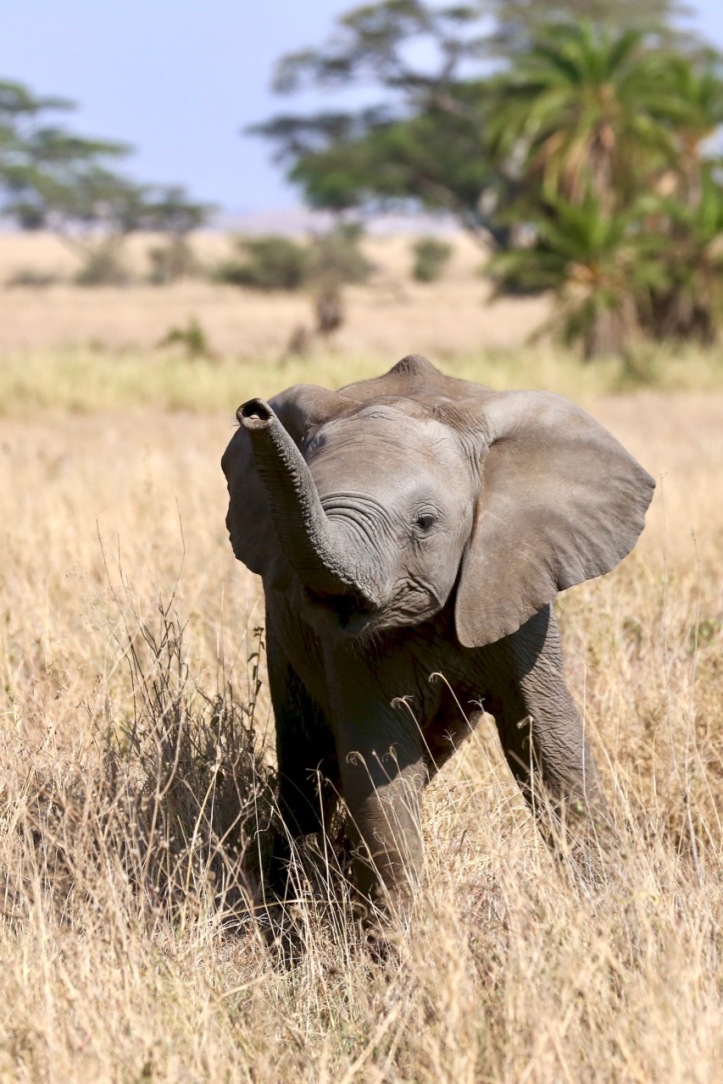 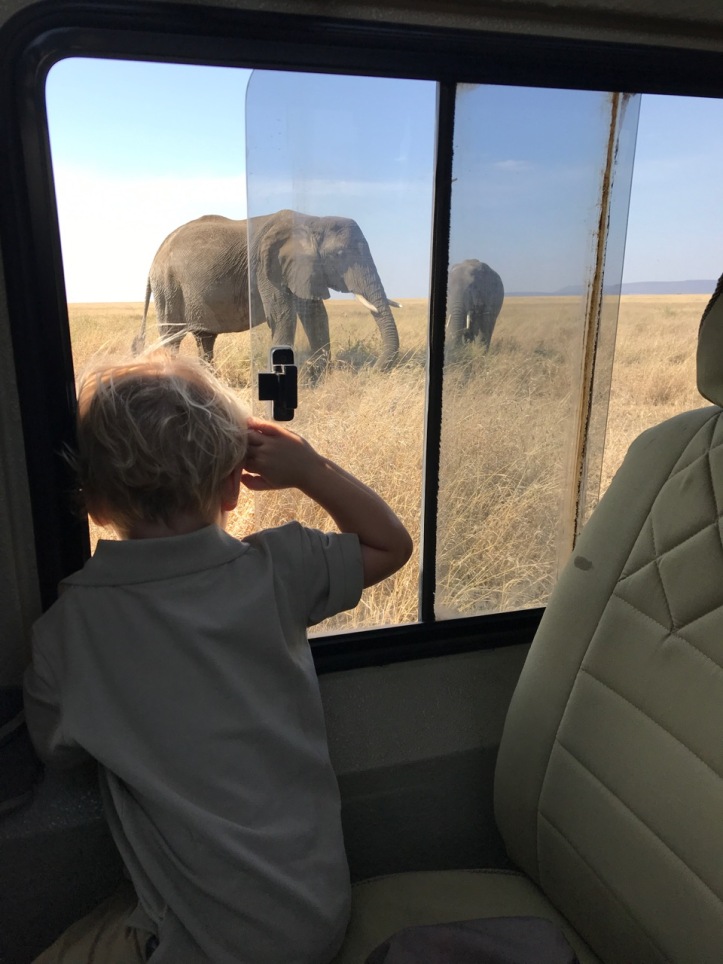 This was our short day, so we didn’t see as much. We saw some Kori Bustard Birds, zebra, lots of warthogs (they are adorable in their oddness), a mama cheetah on a hill in the distance with her 3 cubs, topi, olive baboons, and ostriches.

DS2 LOVED the baboons. They were probably one of his favorite animals. We call him our baby baboon because he climbs all over his parents, wants our food, runs around, and gets into mischief. 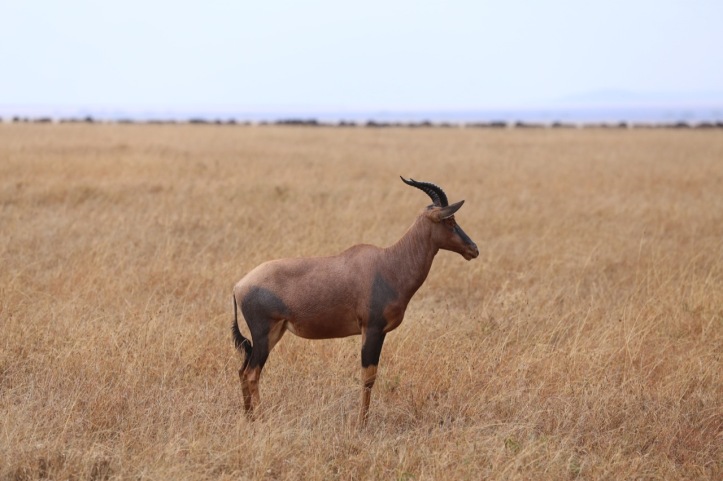 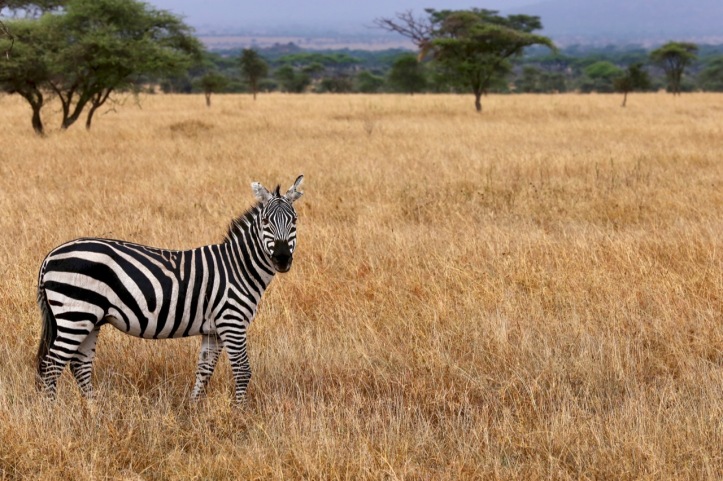 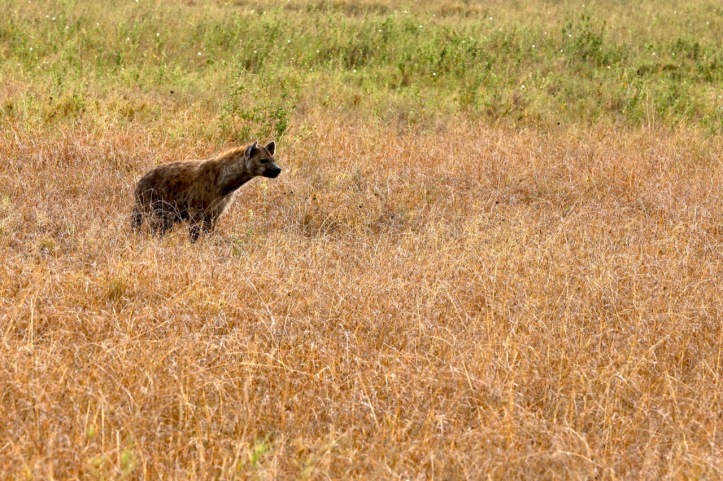 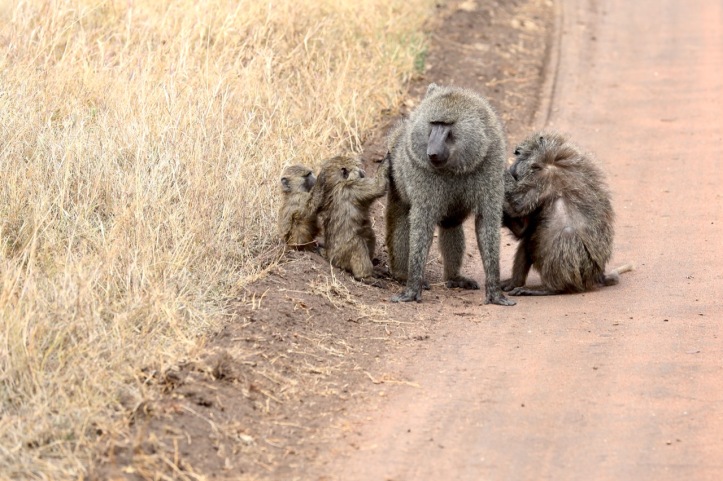 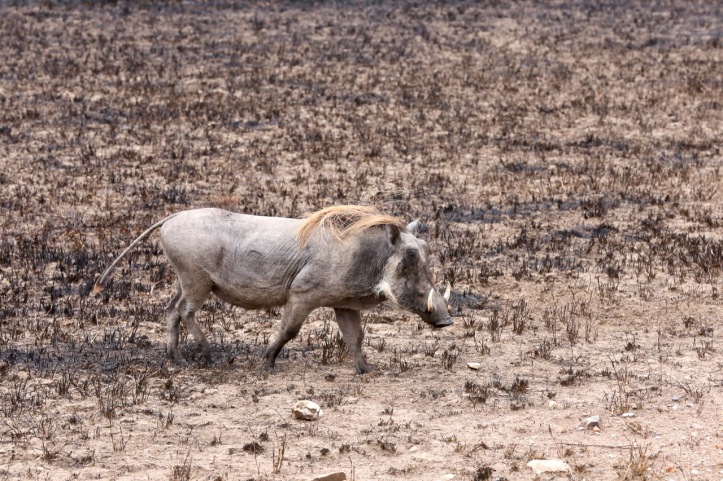 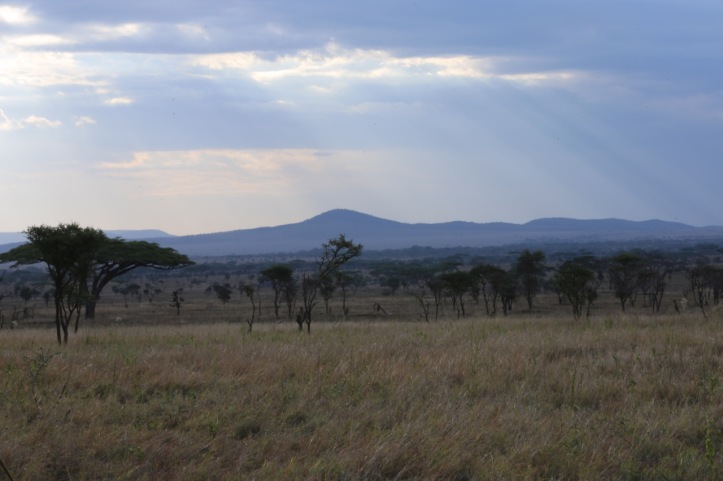 This morning we left the Serengeti to head for Gibbs Farm near Ngorongoro Crater. We didn’t do a formal game drive, but on the way out we came across 13 lions sleeping in the grass right by a fork in the road. We believe they were the group that killed a buffalo nearby two nights prior as they all looked very well fed and were clearly having the passed-out-from-eating-a-lot nap. 18 jeeps surrounded them and they did not care. One lion had a tracking collar on him.

We also saw a cheetah walking.

Our total lion count for the Serengeti was 40! We also saw 9 cheetah and 1 leopard. 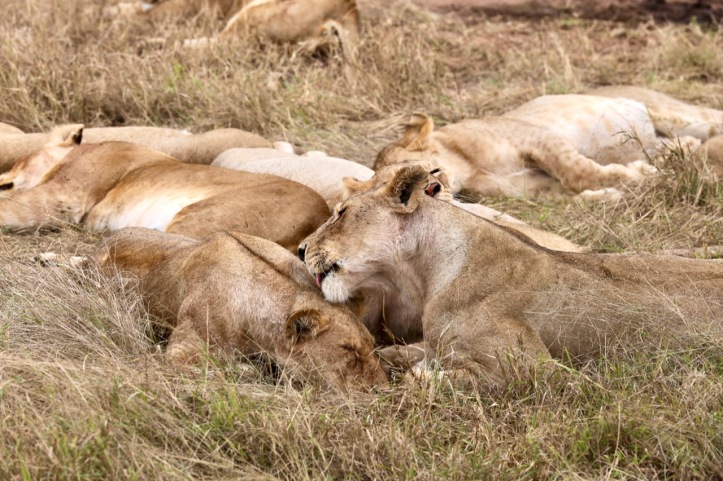 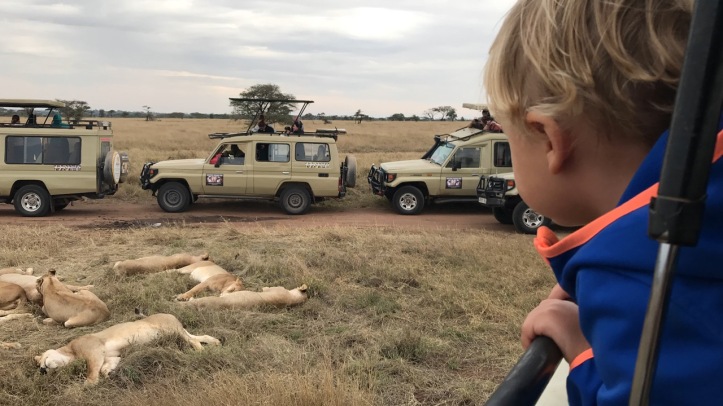 Overview of all posts: