Back in December we went to the Munich Christmas Markets for 3 nights with our kids (ages 6.5 and almost 4). Clearly, this happened a few months ago, but life was busy. And now we are stuck inside like most of the world isolating from Covid-19, and I am trying to catch up on blog posts. We’ll see how this goes! Luckily, I had posted on my personal Facebook page with descriptions of each day so I have some memory of what happened 🙂 Plus it is a fun Chair Travel opportunity as travel plans are clearly on hold.

We took a very early fly from Ankara to Munich. Had to leave our apartment at 4:15 am for our flight! Flew on SunExpress, a budget airline in connection with Lufthansa and Turkish Airlines. It was very bare bones (no drink service, no entertainment systems) but it was a good price and got us there! From Ankara, it was a 3 hr and 20 min flight. We ran into friends from Ankara who were also going to Munich and were on the same flight as them!

Once we landed, we took the train direct to our hotel, which handily was on top of a train station! We stayed at the Hilton Munich City Hotel. Hilton has two hotels in Munich. Ours was conveniently on the direct train line from the airport. It also is a bit away from the main touristy areas, but is still walkable to get to the downtown areas.

Since we arrived so early, we couldn’t get into our room right away, so we dropped off luggage and walked around our part of the city and got lunch. Went back to the hotel and napped. Those early morning wake ups are a killer and we knew we’d be up a bit later than we normally would be after an early flight.

Munich has a ton of Christmas Markets. This was one thing I didn’t know before we started researching-it’s not just one market per city. It is dozens sometimes! Our first day we went to Weißenburger Platz first which was a cool, local one near our hotel with a fun little Carousel and very cool chocolate tools.  It was mostly locals as it is a bit away from the downtown area. Not very big, but we enjoyed the vibe and it was just a few minutes from our hotel and near several restaurants. We loved the chocolate tools there and checked out all the ornaments. I definitely recommend it if you have time to get outside the downtown area.

Then we headed to Marienplatz, the super big main one that was very popular. This one is massive and crowded, but also has a ton of stalls and food options. Right near a very large Neo-Gothic Town Hall (Neues Rathaus) and had some cool moving displays, including a very large window display with tons of moving stuffed animals. We started the trend of so much Glühwein–the hot spiced wine.  There was also Kinderpunsch, which is hot spiced punch and is nonalcoholic. Our kids loved it.

The cool thing about the beverages at all the markets is they are all served in mugs or glasses. You pay a deposit for your glass. If you return it to the stall when done, you get your deposit back. If you want to keep it, then you can and the deposit counts as your purchase cost. We ended up buying 2 mugs over the days there, but could have ended up with many more (but we have limited cabinet space). Drinking out of a real mug is not only more pleasant, but also more green! Win Win!

Had a bit of a hard time finding a spot for dinner that was inside and had seats. It was rainy and cold and we really wanted the kids to be able to sit down and rest and warm up. There were lots of options, but everyone else had the same idea as us!

We started at a little playground near our hotel to let the kids run around a bit. DS3 really enjoyed the steering area.

We then headed to lots of markets!! We hit 4 over the course of the day before kids ran out of steam!

TIP: Rain pants are your best friend if the weather is wet! These are thin, waterproof materials (like a thin rain jacket), that go over their clothes. We kept them in our backpack and put them on when rain started or when we were wet places. DS3 wore them most of the trip b/c he has no awareness and would sit down in puddles! Then they could play or sit on a wet bench without worries. Also added a bit of wind protection. Much lighter weight than snow pants (which we didn’t need as there was no snow).

#1–Residenz Market–inside a palace courtyard. Kids liked the doll and animal scenes acting out stories (though I found them creepy). It is a small space, but was very cute. I had read it gets really busy late (which honestly, is true for most of the markets), so we got there right at opening. 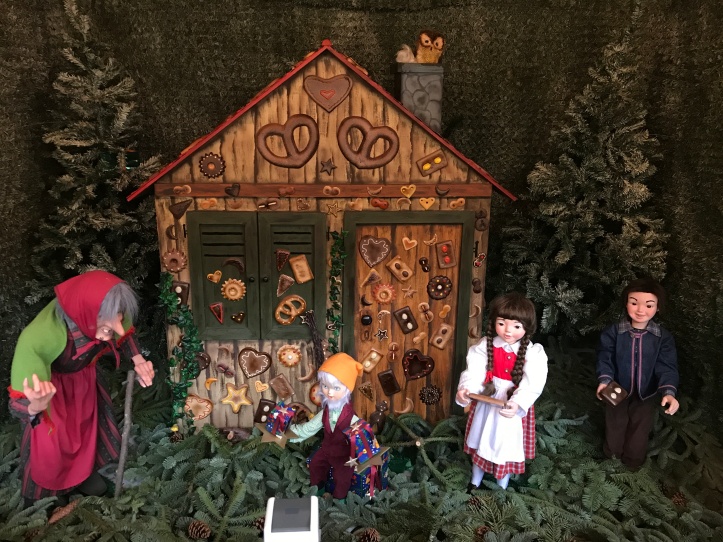 #2–the Medieval Market at Wittelsbacherplatz. Cool displays. Lots of medieval-themed stalls and items for sale. Also lots of meat to eat! It started to rain while we were there, and we went into a Thai restaurant just through an archway in another courtyard next door for lunch. Kids and I got our food fairly quickly. DH’s lunch NEVER arrived. He kept asking and they’d say they were making it, and then they had issues in the kitchen. Kids and I finished our lunch and DH ended up canceling his meal and eating at one of the stalls at the market. But at least we got a break from the rain and it was done by the time we went back out!

Layering Tip: It is cold in Munich in December. We also were dealing with rain–so mid 30sF and rainy. Plus occasional wind. Kids wore pants and long sleeves, winter jacket, hat, and gloves. Plus snow boots. Then we had rain pants to put on over regular pants and a rain jacket in a larger size to go over the winter coat if it started to rain. This made them look like snowmen but it kept them warm and dry.

#3–Market at the Chinese Tower in the English Gardens. Probably my favorite and most kid friendly. From the Medieval Market to the Chinese Tower, it was about a 30 minute walk with about half of it in the gardens themselves. We enjoyed the water and bridges and stopped at a wet playground on the way. 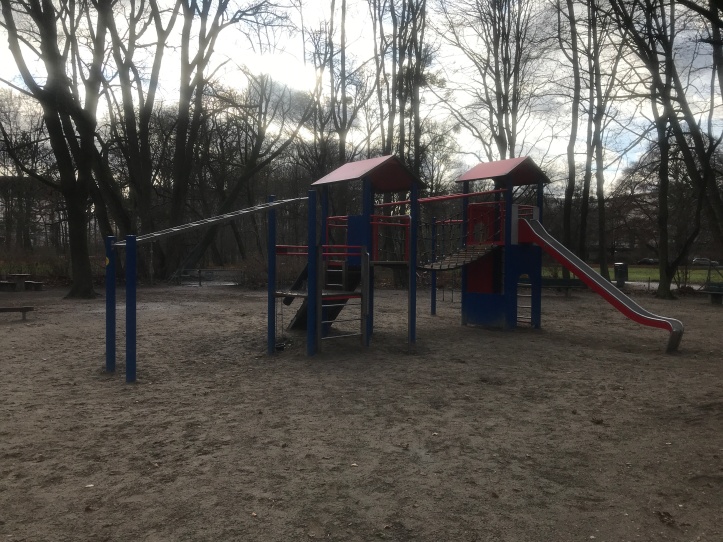 At the Chinese Tower Market, Kids built a wooden toy each inside Opa’s Workshop where a friendly German Grandfather helped. You pick out from a range of kit options and pay what I considered a “medium” cost fee. Then they played on a cool playground with their Daddy while I got to shop some! Their favorite thing was probably riding an old-timey vehicle carousel (twice!). We also ate lots of food and drank Glühwein and Kinderpunsch. 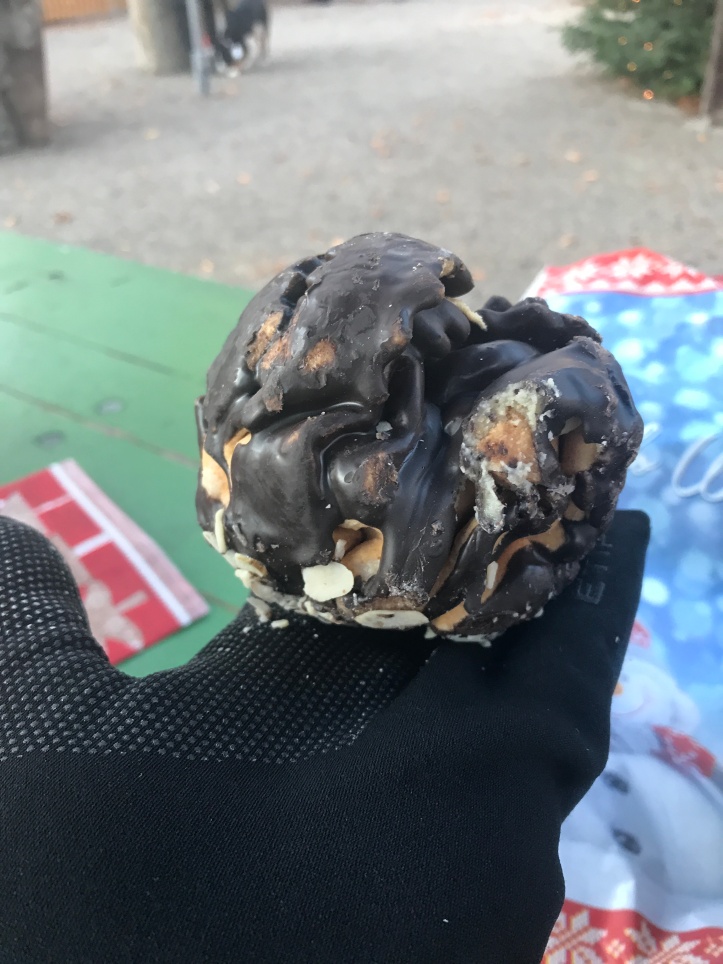 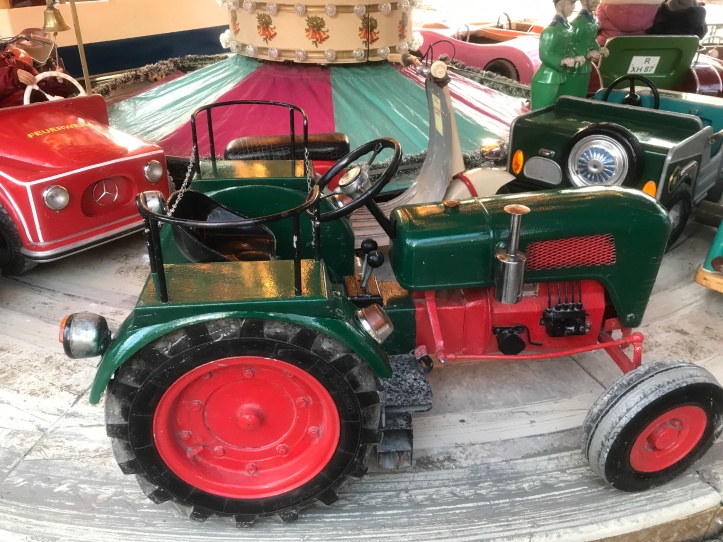 We definitely could have spent longer here, or returned if we were a bit closer hotel-wise.

At this point the kids were pretty tired and we were a 40 min walk from our hotel. We ended up catching a trolley out of the English Gardens to a train stop and then doing the underground to our hotel. I highly suggest having a public transportation map with all the routes and times listed if you don’t have cell data (which we didn’t). And download GoogleMaps onto your phone ahead of time.

#4-Back to the hotel for rest time and then back to the local market (Weißenburger Platz) near our hotel for dinner and nighttime exploring. We ate at an Italian place, Bella Italia, near the plaza and our hotel. It was quite yummy, though crowded. We didn’t have to wait too long though. I was surprised how many people were there given it was only about 5:30 pm!

The kids, and especially DS3, loved the live music at Weißenburger Platz and he danced and played air guitar! At the end, he ran up and hugged the leg of the lead guitarest/singer!

Took a break from the markets (for the kids’ sakes–I’d have kept going!) and did the Deutsches Museum in the morning. MASSIVE science and tech museum very near our hotel. Had a section for young kids and DD6 loved building marble ramps and DS3 liked running a train.

Then we explored some of the sections (no way to hit them all in one visit). The mine exhibit was awesome–huge walkable mine reconstruction where it really felt like we were deep in a mine. Also enjoyed the astronomy and oceanography exhibits. DD6 and DH watched the high-voltage demonstration–including an employee getting into a Faraday cage. DS3 found it way too loud, so the two of us left after the first little lightning bolt.

In the afternoon, we attempted ice skating at  Karlsplatz Schlittschuhlaufen but the rink was very busy and there wasn’t good space for learners, so we bailed quickly. It was really expensive for what we got. I am not sure why it is so famous, but it was just an oval of ice with a zillion people. 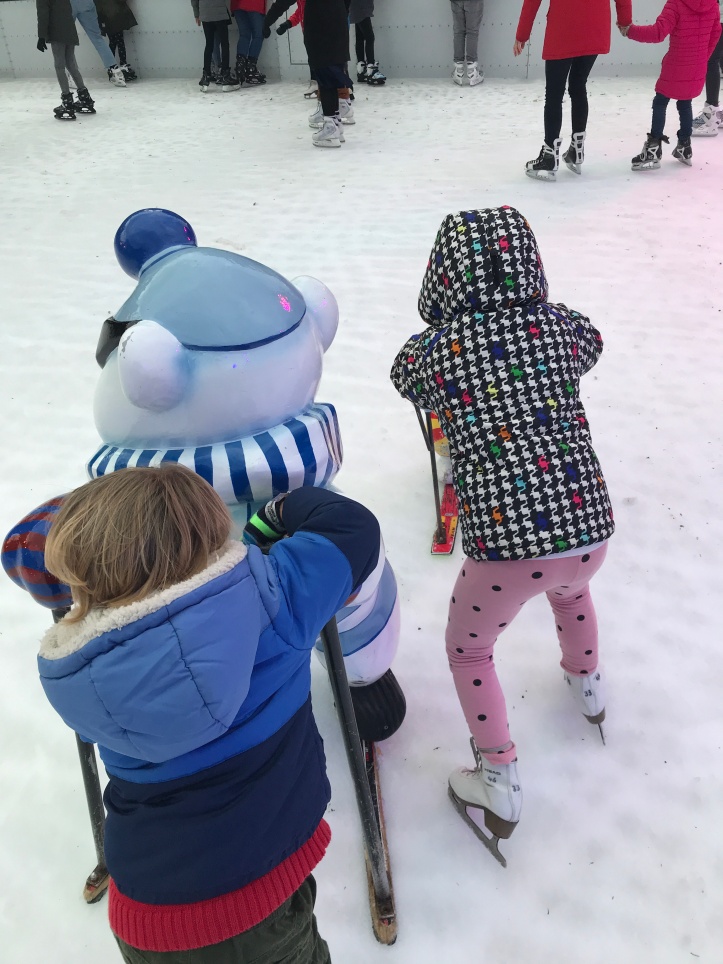 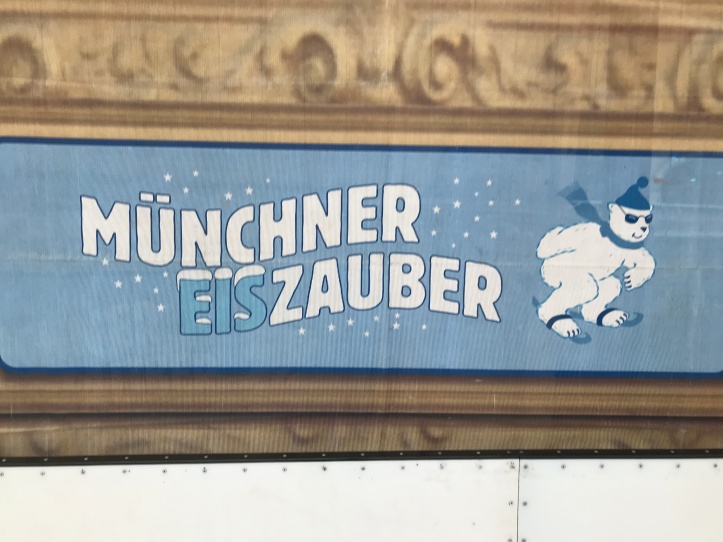 Went back to Marienplatz Market for a final evening stroll.

Day 4 and Final Day in Munich–

DH really wanted to go to the Hofbräuhaus München but it was crazy packed every afternoon and evening. But they open at 9 am! So we went for a morning beer! And we were not the only ones there! They do not have much of a breakfast menu and nothing that appealed to the kids except the bread basket. So I do suggest eating ahead of time and just going for a beer! 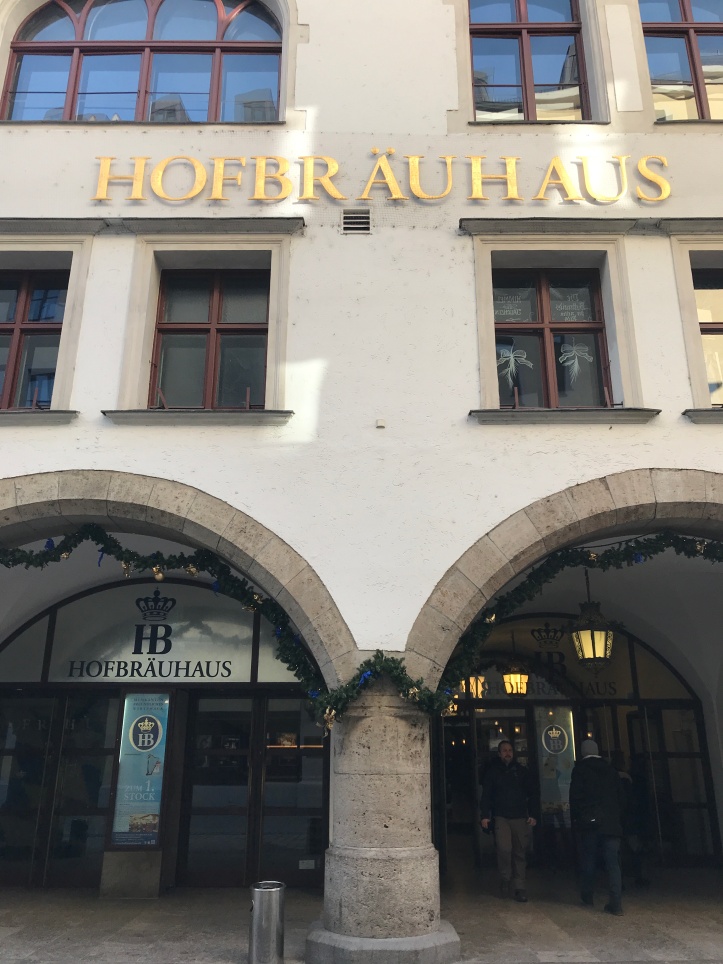 Then strolled the streets a bit before hitting Marienplatz one last time. Saw the cutest little rock nativity scene in one courtyard–I loved it!

Kids really liked the gingerbread type iced cookies–and theirs came on little ribbons they could wear like necklaces while they ate! I really liked the Schneeballen–clump of pie crust like cookie pieces covered in chocolate. 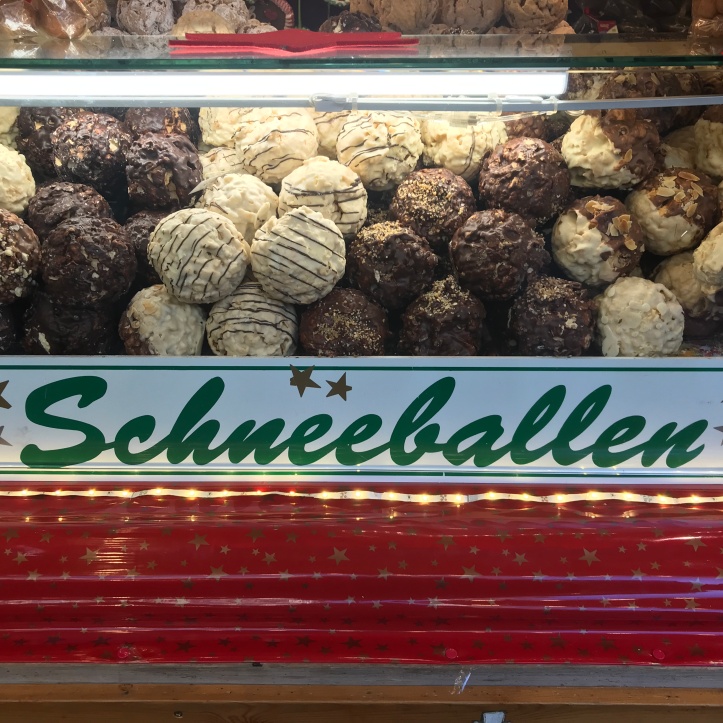 Took an afternoon flight home and landed late at night! What a fun trip!  There were so many more markets we could have done, but the kids could only handle so much browsing shops and standing around drinking hot beverages! But we really had fun, even with lots of misty days and brief rain showers. 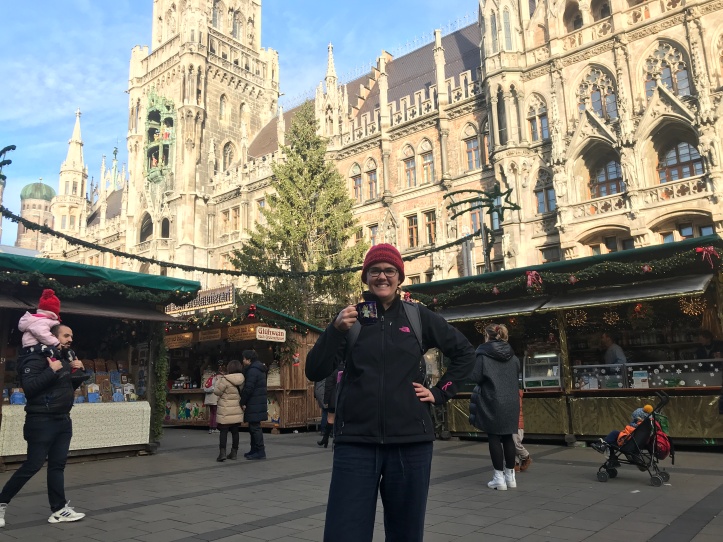 We get ornaments most places we visit as a memory. The ornament below is the one we picked out for Munich. The kids also each got an ornament–a wooden truck for DS and a painted bell for DD.