Luxor, Egypt with Kids-Part 2-West Bank and Valley of the Kings 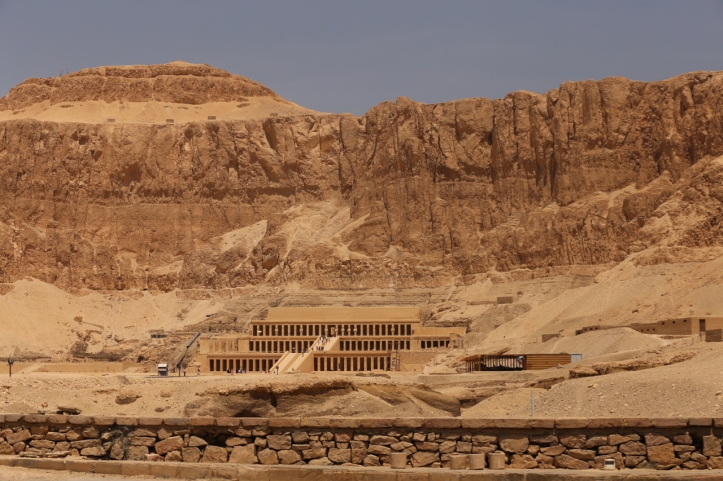 Day 2 was all about the West Bank in the morning and starting our cruise in the afternoon. Our schedule was:

8 am–arrival at Valley of the Kings

Nefertari’s tomb at the Valley of the Queens

Quick stop for a photo at the Colossi of Memnon

Drive 60 km to Esna for the dahabiya cruise

Sailing and late lunch on board

Day 2 of our trip to Luxor started nice and early with a 7 am hotel pick up for the Valley of the Kings. The tombs open early–6 or 7 am–so if you’re going during the busy season going early is key to avoid crowds and if you’re going during the slow, hot season you want to go early to beat the heat! From the East Bank it takes about an hour by car to reach the Valley of the Kings as you have to go about 30 mins south to cross a bridge and then 30 minutes back north. I believe there is a ferry, but we went via car and with kids that is most convenient.

Your admission ticket gets you into 3 tombs of your choice (though not every tomb is open every day). We picked Ramsesses IV, Ramesses IX, and Merenptah. To visit King Tutankahmun’s tomb there is an extra charge (relatively small by Western standards). A few others have extra charges as well. The 3 we picked are very popular as they are near the entrance! 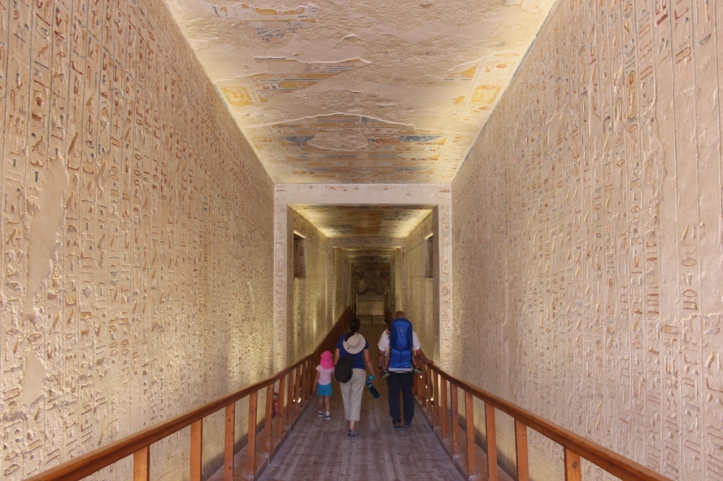 You start in a small museum with a model of the tombs and what they look like underground. That was pretty interesting to see as some go very deep. Then you get your tickets, including “train” tickets and camera tickets. The camera fee is pretty steep here compared to the rest of Egypt–300 le (normally 50le). That’s about $16. They are strict with it. Photography inside the tombs is pretty difficult given the lighting, so it may not be worth it to you depending on your camera and skills.

DS2 loved the little train ride up to the entrance. He’s all about the wheels!

The Valley of the Kings has 23 tombs of Theban pharaohs from the 18th to 20th dynasties. They’re nestled into a valley with a large peak that looks a bit like a pyramid. It gained its modern name in 1828 by a Frenchman. In Ancient Egypt, it was considered very sacred and only funerary processions and a special police corps could enter the valley. The police patrolled to ensure it remained sacred and sealed. However, grave robbers started in the 20th dynasty and by the 18th century all but one had been opened and robbed.

Our first tomb was Ramesses IV, from the 20th dynasty. It was an easy walk with a long ramp and a few stairs. The walls and ceilings were beautiful.

Next up was Ramesses IX’s tomb, which has a typical linear layout of the 20th dynasty. You walk through 3 corridors before entering a vestibule, pillared hall, and the burial chamber. In the corridors are richly decorated scenes from the Litanies of Re, the Book of Caves, the Book of the Dead, and more. The 3rd corridor has an astronomical ceiling.

Our third included tomb was Merneptah’s from the 19th dynasty. It had the most steps of the ones we visited and goes fairly deep into the earth. DS was super hot and cranky by then and DD wasn’t a huge fan of all the stairs, but it was an interesting tomb. 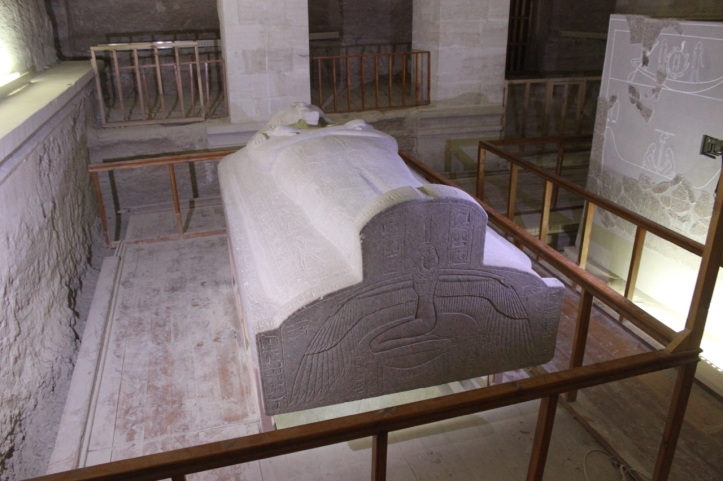 Our final stop in the Valley of the Kings was King Tutankhamun’s from the 18th dynasty. This, as you probably know, was the only one discovered unlooted. Most of the treasures are at the Egyptian Museum in Cairo with a few at the Luxor Museum. It is the smallest tomb in the valley and was discovered on Nov 4, 1922 by English archaeologist Howard Carter. He ruled from ages 9-18 and died abruptly, probably assassinated. His tomb was most likely originally designed for a nobleman and was prepared for him hastily. This explains why it is much less decorated than the others. While it is not elaborately decorated and all the artifacts are gone, it is worth the extra ticket price to visit such a famous tomb. No photography is allowed inside. 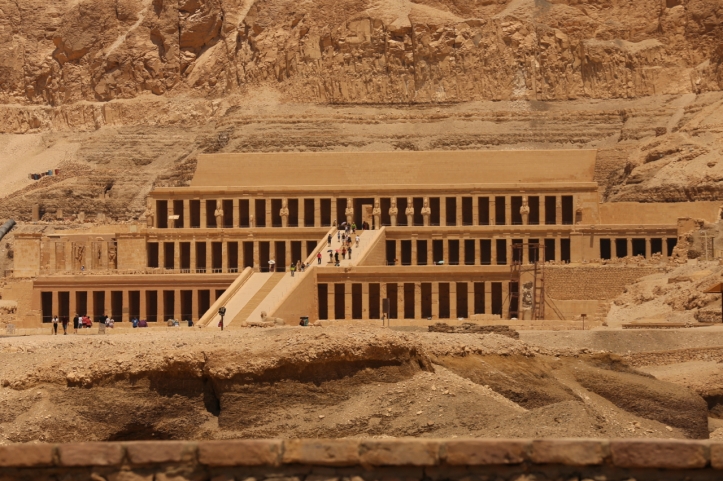 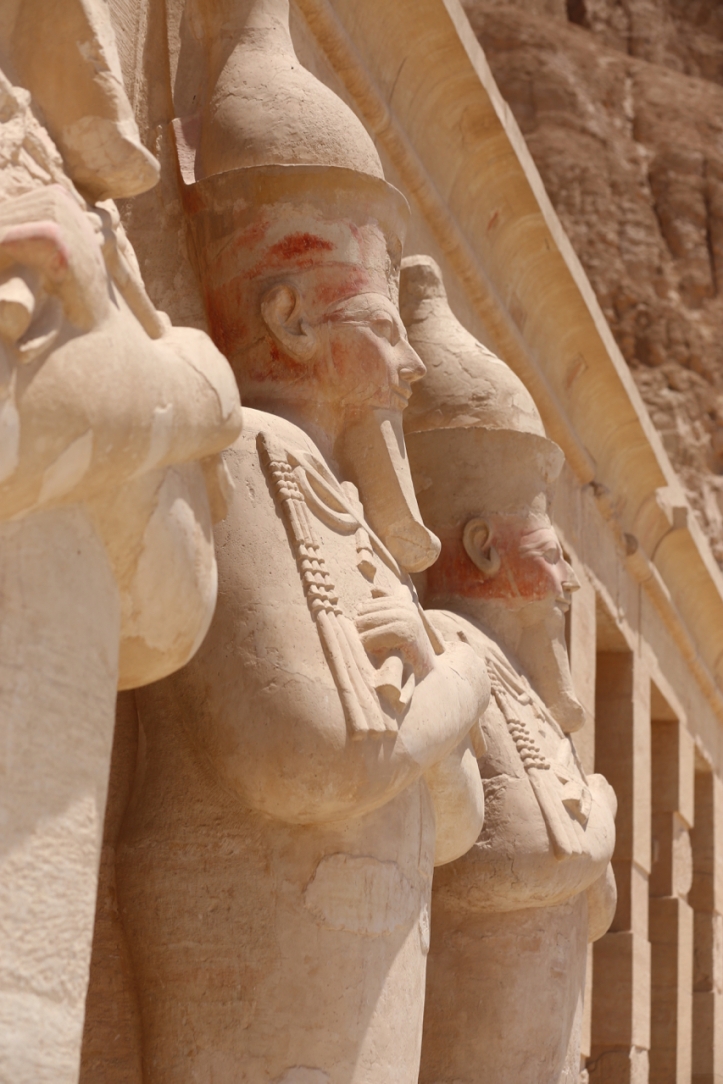 Our next destination was Hetshepsut’s Temple, rediscovered in 1858 by archaeological digs. It had been covered by a large heap of rubble with a Coptic monastery on top. Senenmut designed Hetshepsut’s mortuary temple to have 3 levels and a sanctuary of Amum in the far back. There are also chapels for Hathor, Anubis, Re-Herakhty and the royal cults. The Punt Portico has illustrations of expeditions to Punt, a land between modern day Sudan and Ethiopia on the Red Sea.

Finally, we headed to Nefertari’s Tomb at the Valley of the Queens. This one is fairly recently reopened and many guide books and websites still mark it as closed. It is a pricy addition (1200le or about $66) and visitors are only allowed inside for 10 minutes. However, it is GORGEOUS inside and well worth it if you love ancient Egyptian history. DD loved it because she loves queens and was so excited to see it. DS had hit meltdown mode and freaked out inside, so I did not get to see it for very long.

At this point, we headed back to the car for a 45 min drive to Esna where we got on our Dahabiya. On the drive we stopped for a fast photo op at the Colossi of Memnon, all that remains of the Temple of Amenophis III which was once the largest Theban temple.

Practical Information: Updated to include information from Nov 2018 visit as well as July 2018 visit.

How to Reach: By car it takes about an hour from East Bank downtown hotels

Timing: Sites open up early (6 am), so plan on getting to the Valley of the Kings early!

Strollers: Valley of the Kings–not particularly stroller friendly and definitely not in the tombs. I did see one family who brought their stroller via the little train and then left it outside each tomb with their guide. The ground is rough, but an over roading stroller would do fine. Hetshepsut’s Temple–we used our stroller here. It mostly did fine as the main routes are fairly smooth and there are ramps (steep!) to each level. A few sections are more off-roading style. Nefertari’s Tomb/Valley of the Queens–we attempted our stroller here and had to carry it! Very sandy and our wheels couldn’t handle it. If your stroller does well at a beach, it would manage. It’s not too long a walk from the parking lot to the tomb.

Food/Drink: Valley of the Kings we stopped at an ice cream stand upon exiting. He also sold soda and water. No real seating, but the worker gave us his seat. Hetshepsut’s Temple had a little cafe with juice, coffee, water, and snacks. Nice sitting spot in the shade. Valley of the Queen’s had a small row of shops at the entrance/exit which sold bottled drinks and possibly some snacks. On our 2nd visit in November, we packed lunches and ate them at a cafe near the entrance of Medinet Habu. They were fine with us eating our own food at their tables if we bought drinks.

Bathrooms: Valley of the Kings had bathrooms at the ticket area near the parking lot and at the end of the train ride near the start of the tombs. Hetshepsut’s Temple had bathrooms in the little museum. Medinet Habu we used the bathroom at a small restaurant near the entrance where we also ate our packed lunches and bought drinks. Always bring TP and small coins for the attendants.

Stairs: Most of the tombs at the Valley of the Kings had stairs, some very steep and long. Nefertari’s tomb had a bunch of stairs, as did Seti I’s. Hetshepsut’s Temple had stairs or steep ramps. Deir el Medina was steps down into the tombs, some you had to bend very, very low to get through entry ways. Medinet Habu was mostly all ground level with just a few steps. Assume you’ll do a lot of walking!

Beat the Heat: If you’re going in the hot months, wear hats and bring fans–spritzer water fans are the best! Valley of the Kings has covered benches at pretty much every tomb. Hetsheptsut’s Temple had a shady cafe and each level had some shaded areas. Nefertari’s Tomb had a shaded seating area. Deir el Medina is either full sun or down inside the tombs except for a shaded seating area near the entrance to the tombs for anyone not going down. Medinet Habu is outside with some shade from columns. It had a cafe nearby for a cool drink before or after.