The first thing most people think of when hearing the word Egypt is “Pyramids.” And for the pyramids, Greater Cairo is the place to go. But a close second is probably the Valley of the Kings. And for that you need to go to Luxor in Upper Egypt. Upper Egypt is the southern half of the country, designated as such by the pharaohs long ago due to it being on the upper portion of the Nile (which flows from the south downstream to the Med Sea in the north).

Part Two–West Bank with Kids (Valley of the Kings and Queens, Hetshepsut’s Temple) 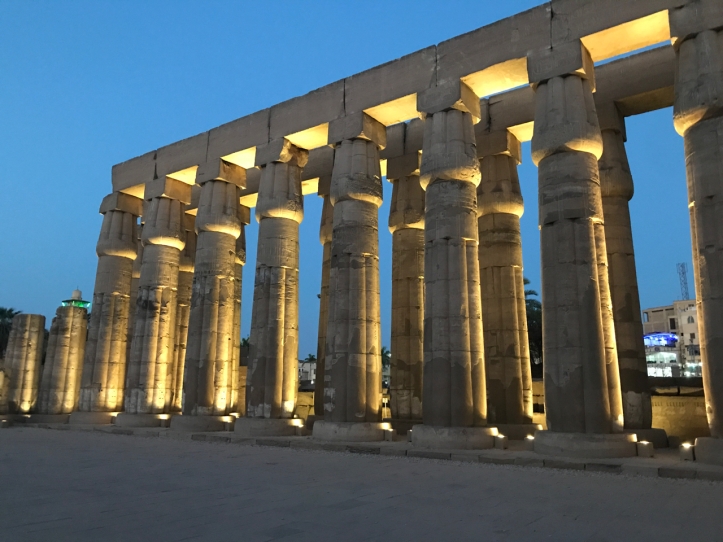 Back in July, we took a trip to Upper Egypt and started in Luxor. We hit the highlights, though definitely want to go back to see more. But if you only have a short window of time, you can see the highlights in 1 night or about 36 hours.

For us, those highlights included:

Valley of the Kings, specifically Ramsesses 4, Merenptah, and Ramesses 3 (3 tombs are included in entry ticket, these are the ones we picked though there are other options) and then King Tutankhamun (extra charge)

Pool time at the Hilton! (It was July in Upper Egypt–can you say HOT!)

This post will cover what we accomplished day 1, which was flying to Luxor from Cairo, pool time, nap time, Karnak Temple, and Luxor Temple. We focused on the East Bank on Day 1 and did the West Bank on day 2 as it takes about an hour by car to get to the opposite bank due to bridge location (there are boat options I believe).

Our Time Line for Day 1:

8:40 am–landed in Luxor. Luckily the airport is small, baggage claim was quick, and it was only about 20 minutes to the Hilton from the airport

Rest of the morning–hotel check in, pool time, early lunch for kids 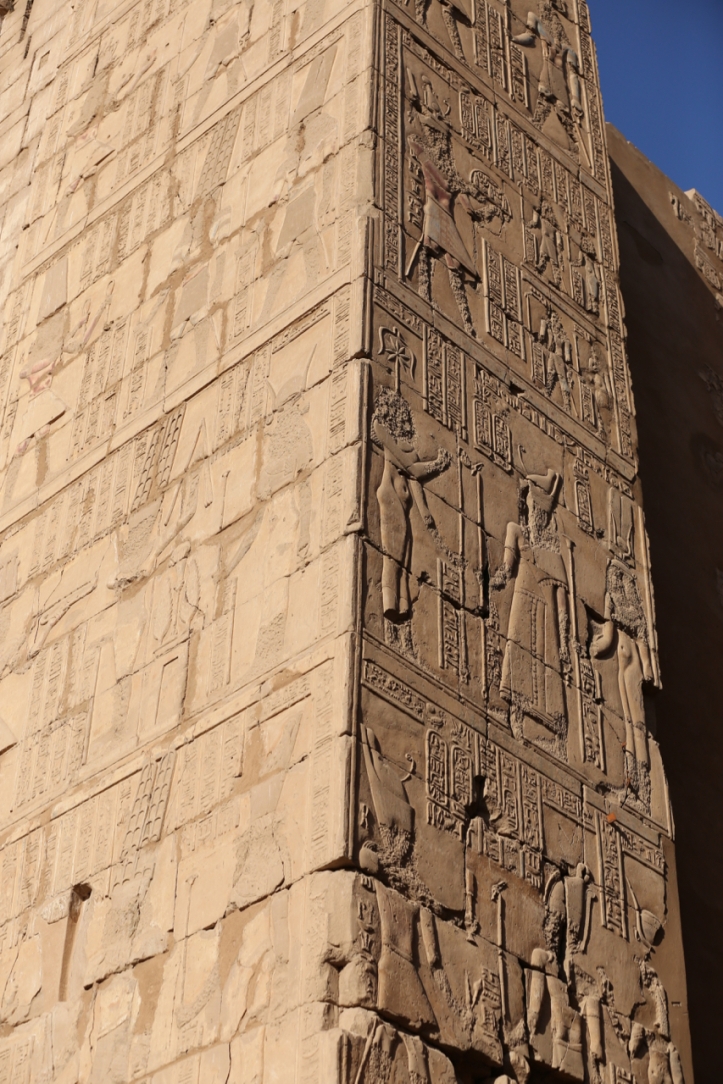 We flew EgyptAir to Luxor, took the cruise to Aswan, and then flew EgyptAir back to Cairo. We have used them for a number of flights and have found them quite good. Only complaint is their online booking seat system can be a pain and doesn’t always work. Online check-in is also annoying and hard to find, though manageable once you find it.

Our cruise on a Dahabiya included the West Bank and Karnak Temple (normally done on same day). We told our travel agent that we were arriving early the day before and he arranged for us to have Karnak Temple done day 1 and even threw in Luxor Temple for free.  They picked us up at the airport, got us to our hotel and then picked us up later after pool and nap time. It worked out great.

I had emailed the Hilton ahead of time asking for an early check in. They said they could do a 9 am check in for a charge ($20 a room I think). We agreed, because waiting til 3 pm was not going to work. Early check-in worked great and we never were charged the extra fee. Win! They had connecting rooms, which was a big win as well–one was a king bed and one was 2 twins which were pushed together. This allowed my in-laws to have the king room and the kids and I shared the 2 twins smooshed together (which then acted like a king). It was great for letting the kids run back and forth between the rooms and at night when they went to bed, I could hang out in the “grown up room” a bit. It was easy to arrange by emailing ahead of time. 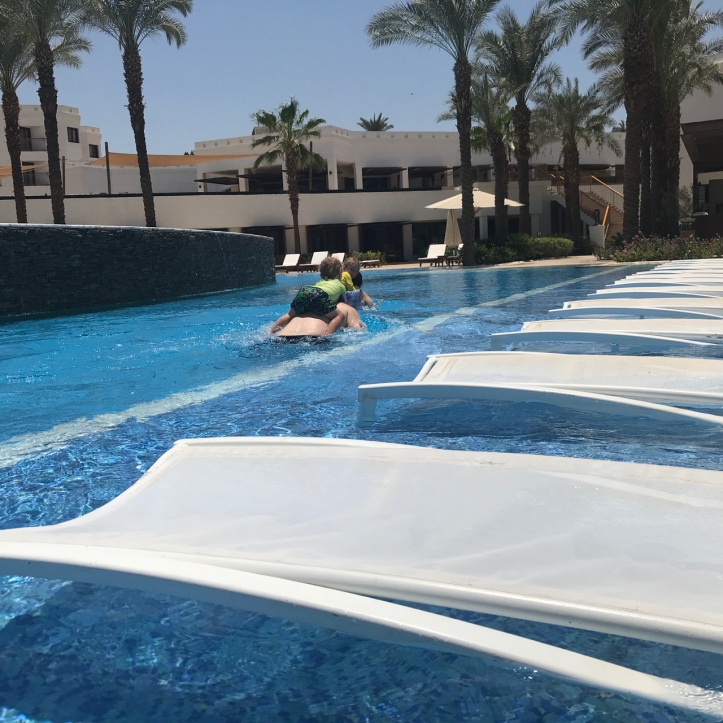 We did the pool for a few hours the first morning. Luxor in July is HOT and sightseeing is best done early morning or late afternoon. The pool at the Hilton is lovely and while it does not have a designated kid pool, we found it worked well for our kids (2.5 and 5). Part of the pool is very shallow with lounge chairs in it–great for kids and for adults wanting to relax and be a little wet. There is also an infinity pool and some very cool hammock bed things my in-laws used while I was upstairs with napping children.  The grounds do go right up to a drop off into the Nile, so you need to watch your children.

I knew with an early wake-up we’d want an early lunch but like most places in Egypt, lunch doesn’t open until 12. While I was talking to the pool bar guy about how to get food into my kids, he suggested I just go in and grab things from the breakfast buffet that was getting cleaned up. Perfect! So he took me in and I was able to get bread and cheese and fruit and lunch meat for them for lunch. It was a nice above and beyond gesture.

Post nap, we met our guide in the lobby for the trip to Karnak Temple. The Hilton is pretty close to it, so it was a short drive. 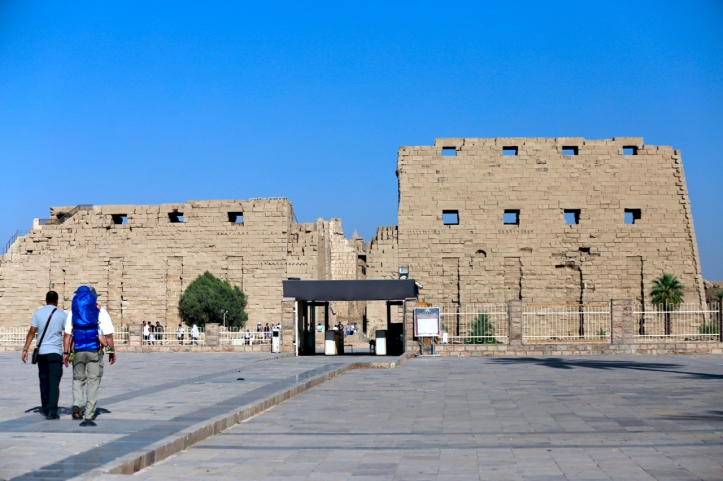 A brief history lesson–the modern town of Luxor and the site of Karnak both comprise the area that used to be called Thebes. Thebes was a great capital during the New Kingdom. It was originally called Waset but the Greeks called it Thebes and that stuck. Thebes began in 2056 BC but didn’t become the capital until after the Hykos invaders left around 1550 BC. The chief diety of Thebes was Amun.

Karnak had a 2,000 year history in ancient Egypt and was the largest religious center with the focus of the complex being the Temple of Amun-Re, the king of gods. He was part of a triad with Mut (his consort) and Khons (their son). Along with being the religious center, Karnak was also the economic center. Each pharaoh built temples or structures at Karnak, and a chronological map of the area includes pharaohs such as Hetshepsut, Tuthmosis III and IV, Ramesses I-XI, Sethos I, and more. There are many structures in the complex, including a sacred lake, open-air museum, Temple of Khons, Temple of Ptah, obelisks of various pharaohs, and temple remains.

After Karnak Temple, we headed down the road to Luxor Temple. Here we got to see the end of the Avenue of Sphinxes which originally stretched from Karnak to Luxor Temple. They are excavating and eventually you’ll be able to walk the length. Archaeologists think it had 2 rows of 365 sphinxes (730 total!). 58 of them are still standing.  It was a processional route for the Feast of Opet and other ceremonies. It dates to at least Hetshepsut’s time (1457 BC). 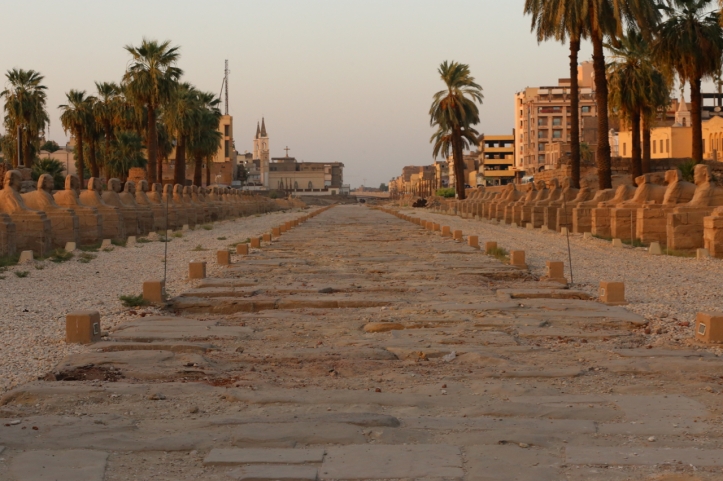 Luxor derives its name from the Arabic al-uqsor meaning “camps” from its time as a Roman camp in the 3rd century AD. The temple itself used to be called Ipet resyt en Imen or “the southern harem of Amun” where a form of Amun lived. Amenhotep III built the main portion of the Luxor Temple in the mid 1300s BC but Ramsesses II changed most of it in the mid 1200s BC. 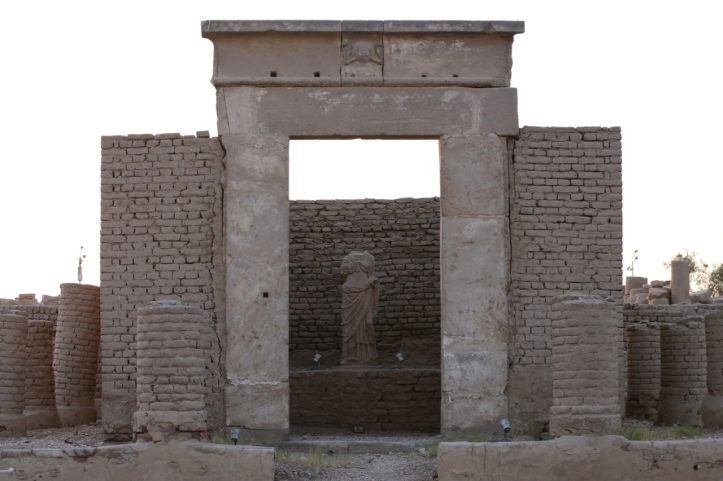 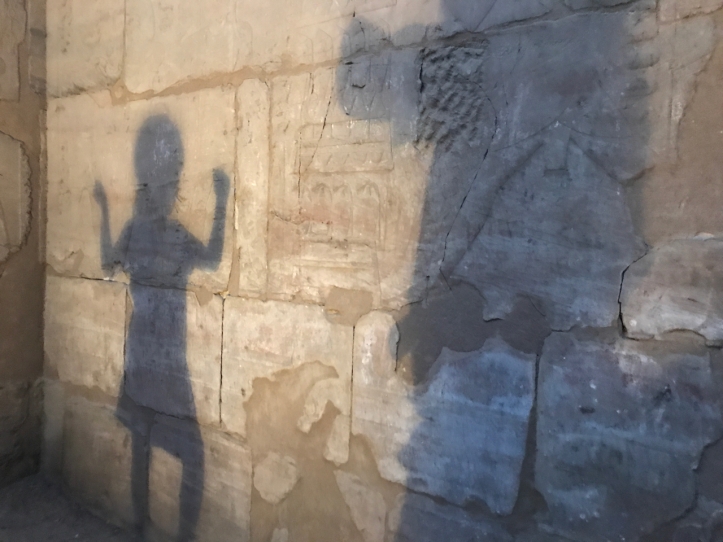 Fun Fact: One of the obelisks was donated to France in 1830 by Pasha Muhammed Ali and can be seen in the Place de la Concorde in Paris. The Muhammed Ali Mosque in the Citadel in Cairo has a clock donated by France at the same time.

Inside the temple is a more modern day mosque, the Mosque of Abu al-Haggag from the 14th century. It has a door that used to be at ground level but once excavations were finished it looks to be more of a 2nd floor window. It is still an actively used mosque by locals (and has a ground level entrance on the other side).

We got to view the temple both in the daylight and at night as we arrived just before sunset. The lights on the temples are pretty cool and it is worth staying around or revisiting at night time.

After the temples, we grab koshari to go on the way back to the hotel. The red sauce was waaaaaaaay hotter than normal, so taste before dumping it all over yours kids’ food! 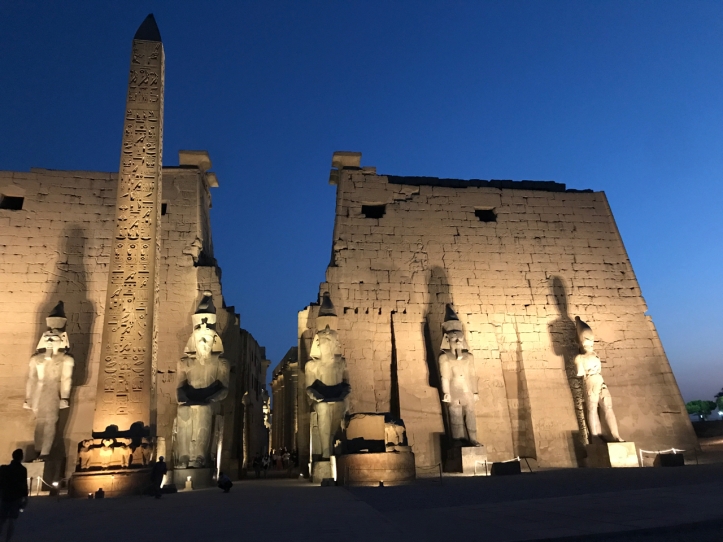 How to Reach Luxor: EgyptAir and NileAir have flights, though EgyptAir has more options. We took a very early flight and did one day of sightseeing the East Bank before starting our cruise with the West Bank sightseeing the next day. There are also some late afternoon/evening flights.

Where to Stay in Luxor: The Hilton is great and prices are very reasonable. It is on the northern end of the East Bank, very near Karnak Temple. We got connecting rooms with a king in one and two twins in another. The pool was spacious, with cool seating and wonderful views.

Stroller Friendly? Both Karnak and Luxor Temples were mostly stroller friendly, particularly if you have a good off roading stroller (we do not, but we still managed). There are ramps most places and at most one or two steps.

Timing: If it’s hot, try to do early morning or late afternoon. We did Karnak Temple about 4:15 pm, followed by Luxor Temple about 6 pm and stayed for sunset (about 6:45 pm). Another good choice would be to do Karnak Temple in the morning (definitely worth it to do it at its 6 am opening to beat the crowds and get great lighting) and Luxor Temple at sunset.

More Sights: If you have extra time or don’t need nap or pool time, you could add in the Mummification Museum or the Luxor Museum (aka Archaeological Museum). Update: We didn’t do the museums with the kids, but I did a second visit to Luxor on my own in November 2018 and visited both museums. The Luxor Museum is very well done with good displays and signage. Smaller than the Egyptian Museum in Cairo, but very worth it. The Mummification Museum is very small and I felt the admission cost was a bit much given its small size. But it showed the mummification process, some mummies, and some of their tools. Also worth it if you have time.

Food: We brought snacks from Cairo with us and definitely wanted them at the sights (well, the kids did!). Buy plenty of water!

Transportation: It is much cheaper to arrange guides and transportation ahead of time rather than use the hotel options. Our cruise included transportation and a guide. You could probably do fine with taxis and either not use a guide, or arrange for one to meet you. The sights are easy to navigate, but there is no real signage.