Kids on Safari: 8 Nights in Tanzania, An Overview with Bonus Scavenger Hunt!

In October we took an amazing, hopefully NOT once-in-a-lifetime trip to Tanzania to go on safari for 8 nights. Ours kids, 2 years 8 months and 5 years 4 months, came with me, my husband, my mom, and her friend. So we were 4 adults and 2 kids total. This post is going to be a summary of our experiences and we’ll get to the nitty gritty in later posts!

Read to the end for a special scavenger hunt bonus for kids!

We live in Cairo, so my mom and her friend (we’ll call them L and R) flew from the US to Cairo where we hung out for a week. Then we all flew to Tanzania. From Cairo, our best flight choices were through Addis Ababa, Ethiopia or Nairobi, Kenya. The return flight through Nairobi had a horribly long connection time, so we picked Addis with Ethiopian Airlines.

It was my first time flying Ethiopian Airlines, and aside from horrible departure and landing times in Cairo (2:20 am flight to Addis and then landed at 1:30 am on the return!), they were good. Kids got goody bags both ways–cute bag with a small stuffed animal, building sticks, coloring pages and colored pencils, and a puzzle. They did not have kid meals, but the flight times weren’t really such that we wanted to eat for the most part.

Addis Ababa’s international airport is fairly small. Not tiny, but easy enough to traverse. Very few food options. We landed there hungry for breakfast and there were only $20 buffets and $4 croissants available. Pack snacks! They had good free wifi, however! On our return through Addis we were late landing and had to rush and they had people helping passengers headed to Cairo jump the security lines to get to the gate.

I’ll start with the quick overview of the schedule and then talk briefly about each stop:

Day 1: 2:20 am flight from Cairo to Addis Ababa, then a flight to Kilimanjaro International Airport, Tanzania. We landed about 1 pm. Picked up and headed to Arusha Rivertrees Country Inn to refresh, nap, and spend the night before starting the safari the next day.

Day 2: Drove through Arusha, had a quick briefing from a woman in charge of the travel agency, and then headed to Lake Manyara. Game Drive in Lake Manyara National Park. Overnight at Kirurumu Manyara Lodge.

Day 3: Drove through Ngorongoro Conservation Area (past the crater) to Serengeti National Park. Game Drive through the park and overnight at Siringit Serengeti Camp.

Day 5: Long day game drive scheduled, but we opted to just do a 3 hour drive in the late morning and then relax at the lodge. Overnight at Siringit.

Day 6: Drove through Serengeti National Park. Stopped at a Maasai Village (would not recommend) and the Oldvai Gorge (where early human remains were found). Drove through Ngorongoro Conservation Area again and ended at Gibbs Farm.

Day 7: Back through Ngorongoro Conservation Area (which was very very bumpy!) and down into the Crater itself for a game drive. Spent night at Gibbs Farm again. (If doing again, I’d end at Gibbs)

Day 8: Drove to Tarangire National Park and had a game drive before ending at Kichuggu Camp. (If we were to rewind and do it again, I’d do Tarangire first rather than last)

Day 9: Left Tarangire and drove to Arusha. Had a boxed lunch and shopped before heading to the airport for a 5:30pm flight to Addis and then onward to Cairo

Our kids participated in everything. They came on every game drive. Some camps do not allow kids, so definitely check before assuming. We had a private jeep, so our kids coming were not a problem. If you’re doing a larger group tour, verify! But I really, really REALLY suggest a private jeep. You can change timing, cut short a game drive, decide to stop for lunch early, sit forever watching baboons because that’s your son’s favorite, etc. With a group game drive you are at the mercy of the guide and the masses.

Breakfast for us was typically between 6:30 and 7 am with departures being between 7:30 and 8 am. It was often a continental breakfast, and then options for eggs made to order and bacon. We liked to eat and then do a final teeth brushing, packing, potty break, etc.  Lunch was often on the go, and as we had a private jeep, we could determine the timing since it just meant stopping the jeep and eating our boxed lunch in the car most days. Dinner was the trickiest. The camps we stayed at were smaller and had set dinner times, and often set menus. A 7 pm start was typical. One camp schedule a 7:30 start, but we were able to get it earlier because of the kids. Bring a lot of snacks if your kids are like mine and like eating between meals or are picky and might not like lunch or dinner.

Arusha and Rivertrees Country Inn–free range lodge (meaning you can walk around, including at night, without wild animal concerns), little villas scattered throughout property. We had 2 villas next to each other. Monkeys roamed the grounds and there was a creek through the property. Very pretty and nice place to stretch your legs and relax after a long flight.

Lake Manyara and Kirurumu Manyara Lodge–Laka Manyara National Park was pretty cool. We saw lots of elephants, giraffes, hippos, wildebeest, buffalo, dikdik, a mongoose, and 2 tree climbing lions asleep in a tree! Lake Manyara is known for the tree climbing lions but they can be hard to find, so we were thrilled our guide found them. Lake Manyara National Park has the lake, ponds, trees, and hills. The lodge was outside the park by maybe 20 minutes or so, maybe a bit longer. Set up on a mountain. At night they had guards watching for animals, but you didn’t need a close escort. Lots of mosquitoes and we had to spray the room prior to dinner to kill them all. Only place our group got bites (DD5 got 3 and R got a couple). We each had a little villa with a porch and view of the valley. 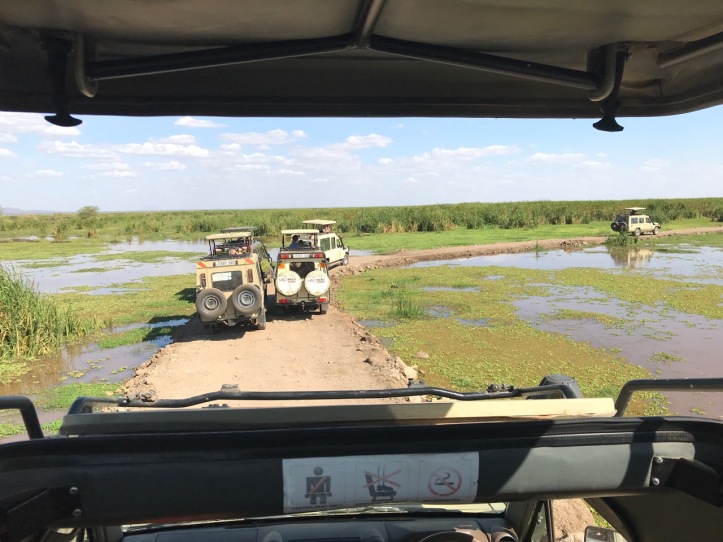 Serengeti National Park and Siringit Camp-This was our favorite park and camp hands down! We spent 3 nights here and could have spent more. Driving to and from you have to go through the Ngorongoro Conservation Area, which is a horrible drive–very very bumpy and dusty. If flying interests you and the expense is in your budget, short flights to the Serengeti are common and there is an airport not too far from Siringit. It does limit your luggage though. The park was great–we saw over 50 lions, 10+ cheetahs, a leopard, a bunch of elephants and giraffes, wildebeest, buffalo, gazelle and other antelopes, lots of birds, and more. Only thing we didn’t see was a rhino. Our “tent” was very glamorous–it was definitely glamping! Amazing views of the Serengeti with herds of gazelle and zebra just outside. At night you needed an escort because predators would (and did) go through the camp.

Ngorongoro Crater and Gibb’s Farm-We saw a rhino in the crater (really far away, but still!). This was the only unique animal in the crater we didn’t see elsewhere. Lots of herds of animals on the plains, bunch of elephants in the wooded area, and some hippos. It was worth going in the crater to see the rhino. Gibb’s Farm is very unique. It’s highly rated and gorgeous. Free range place. Huge farm where they grow an amazing array of fruits and veggies. Farm animals to see. It would be a good place to end the safari and relax a little. Our room was connected to L and R’s room with a door we could open. The rooms were great, though our porch looked right onto the pathway where people walked all the time.

Tarangire and Kichuggu Camp-Tarangire was our least favorite park, probably because we visited it last. It would be a good first park to visit. There were plentiful giraffes and elephants, gazelle, wildebeest, baboons, etc. However, there were not many lions (we saw 2) and while there are a few cheetahs, we didn’t see any. The camp was nice, though more rustic than the other places. The floor was a mat rather than raised and our view wasn’t great. It would also be good to start at the camp and work up to Gibbs rather than the other way around. There were biting flies in Tarangire and we spent much of the game drive attacking the flies. DS2 got great at spotting them and yelling FLY!

All the camps–We came to the safari expecting minimal wifi and power only for a few hours a day. We had power banks and a charging plan ready. However, all the places we stayed at offered wifi. Many just in the reception area, but it was always a pretty place to hang out and send an email or text. L and R were able to FaceTime with loved ones back home everywhere. In fact, L had better wifi abilities in the middle of the Serengeti than in my living room in Cairo (her iPad hated my house, but was fine on safari!).

Every place had 24 hour power thanks to solar power, though we were warned if weather was bad then there could be restrictions. But we had it all day and night. Lake Manyara’s Kirurumu camp was the only one we had to use a plug adapter even–the others all had fancy outlets that take a wide range of plug shapes! (though it is still all 220 power).

All camps had running water and real bathrooms. We had regular sinks and toilets. All the camps except Kichuggu in Tarangire had regular showers as well and Gibbs and RiverTrees had bathtubs as well. Kichuggu had a shower head that you turned on and off with pull levers and used water from an outside basin and gravity. They warmed the water for you, though!

This is not necessarily true for every place, but if you want wifi and power while on safari, you can definitely get it!

We used Remote Recreation and Charles Slater to book our safari. He is a retired Foreign Service Officer for the US Government and has done safaris his whole life.

We haven’t used them, but for Tanzania, Makasa seems to be a good option as well. They have small children, so know what the kids need.

An Overview of all Posts:

Bonus! Animal Scavenger Hunt These were animals we saw in Northern Tanzania in October. Different months or different countries might have different animals. I put the scavenger hunt in page protectors and each day, DD5 marked off the animals we saw that day. We’d erase and start over each day. You could also use a marker and just check off each animal with the goal of finding them all by the end. I’ve also included a page where you can keep a tally of some of the most popular animals.